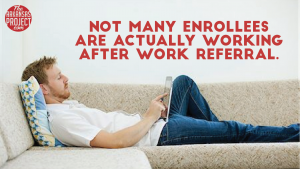 A small number of enrollees in the Arkansas Works / Medicaid expansion program attempted to find employment after receiving a work referral, according to the Department of Human Services (DHS).

According to numbers sent to The Arkansas Project by a DHS spokeswoman, 144,716 enrollees were sent referrals to the Department of Workforce Services (DWS) since January. Approximately 6,500 enrollees accessed job training or other services from DWS after receiving a referral, according to DHS. About 5,400 enrollees reported getting a job after taking advantage of DWS training and services, according to DHS.

The Arkansas legislature voted to transition the Medicaid expansion population away from a work referral system and onto a work requirement system in May. If the federal government approves the change later this year, all able-bodied adults on the program will be required to work, volunteer for a charity, or participate in worker training. An enrollee would risk losing the benefits received under this program if the enrollee doesn’t comply with the requirement.

These numbers suggest that a work referral system is largely ineffective at getting people to work, but a work requirement would be a stronger incentive to get more enrollees working and moving up the economic ladder.

Asa Hutchinson admitted the ineffectiveness of the referral system in March:

Why is that the case? It’s not mandatory. It’s a simple referral. The work requirement that we want is that they actually have to show up. They actually have to be either working, in worker training, or participate 20 hours a month in a volunteer organization in support of a charity activity. This is similar to what’s required under the SNAP work requirement. It’s for able-bodied individuals. This is a work requirement that will encourage those that are able-bodied to work and give them the tools they need to move up the economic ladder.

According to DHS data, only four percent of enrollees currently access job training and other DWS services. However, 83 percent of the enrollees who actually show up to DWS have found employment in 2017.

By requiring more enrollees to look for employment, Arkansas’s work requirement can begin the process of getting more Arkansans back to work and off government dependency.

One thought on “DHS: Few Enrollees Working After Work Referral”