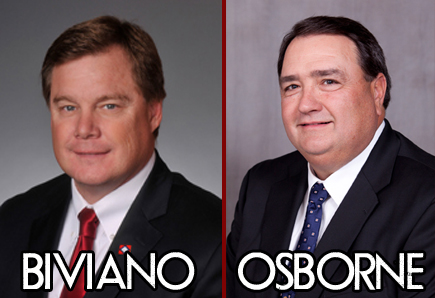 The police chief of my community in north-central Arkansas created quite a stir over the weekend after his comments in the Sunday paper.  According to the article, published by the Daily Citizen, Kyle Osborne called incumbent state Rep. Mark Biviano “desperate” for signing Americans for Tax Reform’s Taxpayer Protection Pledge. Osborne is challenging Biviano for his seat in this fall’s election.

“My first thought was, ‘Desperate.’ How desperate are you to get re-elected to lock yourself into something like that?”

But then we get to the crux of the matter–Osborne realizes he’s been backed into a political corner, and so he spins:

“I don’t want to lock myself into signing a pledge for a special interest group out of Washington, D.C., that has no concerns for the state of Arkansas.  Once you sign that, whatever the circumstances are, you can’t change your mind.”

Osborne said that, were he elected and were a tax increase proposed, he would meet with his constituents to see what they wanted him to do.

“If they say yes, then that’s what I’ll support.  If they say no, then I’ll oppose it.”

A layman’s translation:  “I will vote for tax increases if people tell me to.”

It occurs to me that Osborne lacks a basic understanding of governance.  Governance is not (or should not be) a game where government raises taxes every time it overspends or has a new idea for a fun project.  Governance should be about operating within a budget.

Furthermore, we do not live in a direct democracy–candidates should be elected based on their values, and their constituents should be able to trust them to act based on those values.  For example, Rep. Biviano says he is against tax increases and will oppose them.  People who vote for him know when they cast their ballot that this is the case.  Unfortunately, those who vote for Mr. Osborne are not so lucky.  They’ll have to wait and see what the legislative session brings and then hope to gain Osborne’s attention long enough to find out where he stands.

Osborne also fails to consider the possibility that the interests of “the special interest group in DC” are the same interests of the people of Arkansas–and that they are furthered by a refusal to give government more money to waste.  Osborne lives in a city and a county full of people that have repeatedly voted down unnecessary tax increases over the last several years–the same region that elected Mark Biviano in 2010, a champion of limited government.

Rep. Biviano’s response to this brouhaha was quite simple: he opposes tax increases.  He also reiterated the need for real tax reform in the state:

“I pledge that I won’t be part of any great tax increase. We need tax reform. We need to put the money back in the hands of the people.

In response to Sunday’s article, Mr. Biviano’s campaign tells me that he “shares the values of the people of district 46 who are concerned about rising taxes, encumbering regulations, and the staggering growth of government.”

“I signed that the ATR Tax pledge because we do not have a revenue problem in Arkansas; we have a spending problem. Arkansas ranks in the bottom third of business climate, our families’ personal incomes have drastically dropped, and we have one of the nation’s highest tax rates. We need to take a serious look at how we are spending our families’ money.

Arkansas’s leadership over the past several years has grown government spending and government jobs while Arkansas’ private sector has lost 38,000 jobs. We can do better for Arkansans. “

Now, let’s look at the facts.  Biviano, who is finishing his first term in the Arkansas House, isn’t just a big talker–he’s actually worked to oppose tax hikes on Arkansans.  During his first term, Biviano fought against the severance tax hike and the road tax increase that will be on the ballot this November.  Biviano also voted for the following tax cuts:

In addition, Biviano sponsored legislation that would’ve given first-time homeowners a tax credit and voted for the Arkansas sales tax holiday.

We can’t say for sure how Mr. Osborne would vote.  He has never held elected office and he won’t say.  All he will tell us is that he’ll “listen to the people of his district” and vote how they tell him (no word on which constituents will be lucky enough to acquire his listening ear).  But we do know that he wants the flexibility to support tax hikes on hardworking Arkansans.

Perhaps the desperation in this race can be seen in Mr. Osborne’s comments.  They’re old, tired, worn out arguments against responsible tax policy, such as “What if there’s an emergency and we need a tax?”  But we are already in an emergency–it’s called a real unemployment rate of more than 9% in Arkansas–and there is reason to believe that this emergency calls for tax relief, not tax raises.