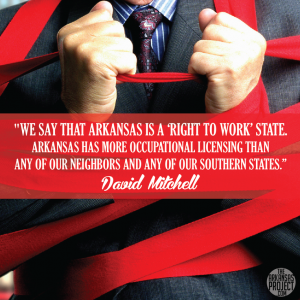 As I’m sure you’ve heard by now, Gov. Asa Hutchinson has nominated former legislator and University of Arkansas lobbyist Johnny Key to be the next Education Commissioner.
As Arkansas Business notes, however, there is one slight difficulty with the Key nomination:

The Mountain Home Republican has been involved in a number of school issues since serving in the Legislature since 2003. He is not an educator or former superintendent, as is currently required.
Hutchinson has asked lawmakers to change the job requirements.

The bill that would lower the occupation requirements to serve as Education Commissioner in Arkansas is SB 681, which passed the Senate Education Committee. The bill would lower those requirements to a person “of good moral character, recognized as a leader in the field of education, and qualified technically and by experience to direct the work of the department”
Now, as loyal readers of this here blog will remember, several lawmakers supported a bill awhile back that would help with lowering onerous occupational licensing requirements for all workers in Arkansas, not just one well-connected former legislator/lobbyist getting a bureaucratic appointment.
That bill was state Rep. Richard Womack’s “Right to An Honest Living” bill. This bill would allow average Arkansans to contest the ill-founded regulations that abound in Arkansas. As we’ve noted before, Arkansas has the second most burdensome licensing laws and is the fifth most extensively and onerously licensed state, according to the Institute for Justice.
Since Hutchinson nominated Key, I’m going to go out on a limb and predict that SB 681 will breeze through the legislature and become law. It’s currently sitting in the Senate Education Committee.
However, the future of Womack’s “Right To An Honest Living” is much more uncertain. Womack’s bill passed out of the House Public Health Committee with bipartisan support three weeks ago; since then, it has stalled after pretty much every special-interest group in the state lost their collective minds over the prospect of ordinary Arkansas workers having a legal means to challenge burdensome state occupational regulations.
So: does the legislature want to be seen as more responsive to the professional needs of former legislator/lobbyists like Key than the vast majority of Arkansas workers? If not, the legislature shouldn’t just pass SB 681 to benefit Key while the “Right To An Honest Living” bill, which would help far more Arkansas workers, continues to be ignored.

2 thoughts on “Deregulation For Johnny Key, But Not For Thee”