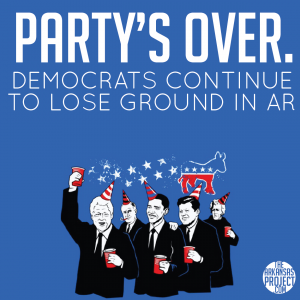 With another day comes another national news article showing just how much of an uphill climb the 2014 elections will be for Democrats statewide.
From the New York Times:

When Mr. Pryor first won his Senate seat, the five fast-growing Republican-leaning metropolitan counties held 19.9 percent of the state’s population. They now hold 25.6 percent of it. Democratic-leaning counties where Mr. Pryor received at least 60 percent of the vote now represent just 21.5 percent of the population, compared with 23.4 in 2000.
And the voters who remain in these Democratic-leaning areas are not as Democratic as they once were. Not only have many decidedly turned against the national Democratic Party, but a large percentage of the most Democratic voters have left the electorate. The so-called Greatest Generation of older voters, who came of age when Dixiecrats still reigned in the South, were the most reliably Democratic cohort in Arkansas. Voters over 65 even voted for John Kerry, according to the exit polls.
The “Greatest Generation,” people who were young adults during the World War II era, represented 11 percent of voters nationally in 2002, according to the Current Population Survey. Now in their late 80s or older, they represented just 2.4 percent of the electorate in 2012. The broader group of voters who were at least 65 years old in 2002 represented 23 percent of voters in that election, but now at age 75 or older had shrunk to just 9 percent of the vote in 2012.

You can read the rest of the article here. However, the Democratic Party’s downfall in Arkansas isn’t just due to demographics; it’s also that Arkansas voters have finally noticed that the Democrats who had represented them were at odds with many of our citizens’ most basic values.