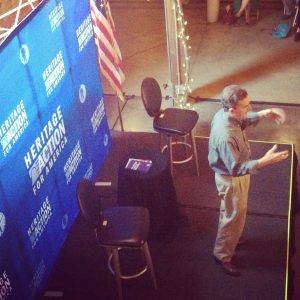 Former U.S. Senator Jim Demint, president of The Heritage Foundation, was in Fayetteville Monday night as part of Heritage Action’s “Defund Obamacare” town hall tour across the country. Before the main event, Demint held a press briefing, where he had some interesting things to say about the ‘private option’ as well as Congressman Steve Womack’s position on defunding Obamacare.
Demint began by addressing the comments from critics of the defunding strategy who say it can’t be done:

Our strategy comes from our knowledge of how Congress works. Republicans may control just 1/3 of the government, but constitutionally they control the purse strings. If they fund the government — which we’re encouraging them to do — except not to fund Obamacare. That is something the president will have to deal with.

But what if the defund strategy did lead to a government shutdown? Would this damage Republicans? Demint said there is a risk, but Republicans should call President Obama’s bluff:

There is a risk. Certainly they will be blamed if they don’t get on the offense and tell Americans what we are doing. Because if they pass a bill when they get back in September — and they should’ve done it before they left — which funds the government and then they go out and say, ‘We funded the government, Mr. President. It’s your decision whether or not to accept that funding or to close the government down.’ I think it’s an argument we can win. The popularity of the president is slipping, the popularity of the bill is slipping every day. Increasingly, we are hearing about — today it was a slush fund for Planned Parenthood to promote the bill. I think even folks who have said they didn’t agree with the defunding strategy are coming around to that. Paul Ryan said — I think it was today or over the weekend — that he thinks the House should pass a funding bill that funds the government without Obamacare.

The people who are saying it would be political suicide are the same guys that were handling the 2012 elections for the Republicans. They were saying the whole time, ‘Don’t do anything, don’t be the issue. Make Obama the issue and we will win’ — and you see how that worked out for us. What we find as we drive around the country — I’ve been to 45 or 50 cities in the last 6 months — is that people expect folks to stand up and do what they say they are gonna do when they are up in Washington. And for somebody who is representing this area to say they are against Obamacare, yet they are going to vote to fund it — that’s the kind of thing people are tired of.

Finally, Demint was asked to comment on the “private option” version of Medicaid expansion that was passed here in the state:

It still puts Arkansas in the grasp of the federal government. They are completely dependent on the funding…the federal government makes all the rules. And once you get all these people on Medicaid, you aren’t going to be able to get them off if the federal funding dries up — and it will. The worst part of it is Medicaid does not pay doctors enough to see patients. And what you’ll see in rural Arkansas, as we’ve seen in rural South Carolina, is they’re going to close their practices to Medicaid patients. You can’t make a living as a doctor when you’ve got over 60% of your patients on Medicare and Medicaid. So the best doctors are gonna go to places like Texas that don’t have an exchange and are trying to maintain a private market. You’ll have a physician shortage, and I’ve likened it to giving you a bus ticket when there’s no buses. You may have a Medicaid plan, but you’re not going to have a doctor that sees you.