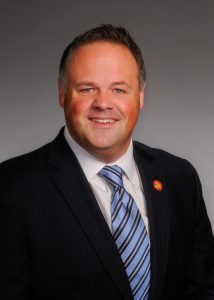 In a radio interview with Mountain Talk 97 that will air tomorrow, Lt. Governor Mark Darr says he “wasn’t for” the ‘private option’ version of Medicaid expansion that Arkansas has adopted.

(You can hear part of the interview here)

Darr tells hosts Dale Hoffman and Richard Caster that, had he been governor, he likely would not have vetoed the plan because it was passed by the legislature, but, using a football analogy, said legislative Republicans “maybe should’ve called a better play:”

Honestly, that’s a hard thing to say. I probably would not have [vetoed] because it was voted out. I agree with Governor Beebe in a sense when he says ‘they come up with that…’ That he respects the process. But listen, there’s not a good choice: if you veto it, immediately the taxes for small businesses in Arkansas go up. If you pass it, you just added to the national debt. There’s no good choice with the private option. I don’t think anybody wanted to do it.

Of course I would argue that not expanding Medicaid and thereby not adding hundreds of thousands of new Arkansans to taxpayer-funded health care was probably a pretty good choice. And spending hundreds of millions of dollars per year to “save” $38 million in new taxes on small businesses isn’t a very good trade. But Darr’s comment that “no one wanted to do it” is particularly interesting. Of course Republican legislators wanted to do it! Speaker Davy Carter said the ‘private option’ was “turning a losing hand into a winning one.” Senator Jeremy Hutchinson told Saline County constituents that the plan was “Goldwater and Reagan,” representing the entitlement reform that Republicans have been fighting for 50 years. Rep. Charlie Collins has long maintained that the plan will “turn Arkansas into a good jobs magnet” and was a “conservative solution” to Obamacare. Clearly, many Republicans very much wanted to expand Medicaid via the ‘private option’ — even though (what I see as) better alternatives were available.

In a follow up interview with The Arkansas Project, Darr said he would not have voted for the ‘private option’ had he been a member of the legislature:

Darr told me he did not speak out on the ‘private option’ during the session because 1. No one asked him and 2. It was a very divisive issue and he “didn’t want to be a part of that.” As for whether or not Darr thought Arkansas would have been better off to not expand Medicaid at all, he said:

You know, I think if you can look in a crystal ball…I think the state reps, a lot of them did the research on it. A lot of real conservative people in my opinion — David Sanders. And Bruce Westerman helped write the bill and then backed off of it. I believe these people are conservative people. Had we seen that they were going to try to take away the employer mandate or to where you own a business, ‘OK, well we’re not going to tax you, but the individual mandate still stands.’ I think if we saw all that, yeah, we should’ve stayed away from it. But based on the information that they had, I think that they — whether they voted for it or against it on the Republican side, I think they did the best that they could with the information that they had readily available.

Rep. Westerman, of course, is a rumored Fourth District congressional candidate, as is Darr. And of course there were plenty of warning signs that Obamacare implementation wasn’t going to go off without a hitch when the ‘private option’ was being debated — and many voices echoing those points. The problem is that lawmakers didn’t want to listen. After this answer from Darr, it is unclear to me whether or not he favors or opposes Medicaid expansion in general.

I don’t fault those that truly thought that this was the right thing to do because of the situation and I don’t fault the people that said ‘Listen, out of principle, I can’t do it.’ And to be honest with you, that would’ve probably been me. I wouldn’t have done it. I mean, I’m the guy that campaigned against Obamacare. So based upon that, I couldn’t have done it. It’s just a crappy situation. It’s horrible.

Darr’s comments serve as further evidence of the unpopularity of the ‘private option’ in the state — and particularly amongst Republican primary voters or the “Republican base.” No doubt this position will be popular with those voters. In fact, AAI produced polling before the passage of the ‘private option’ that demonstrated this fact. It will be interesting to see if Medicaid expansion becomes a part of the GOP congressional primary conversation.

For now, all we know is that this is the first time Darr has spoken candidly, on the record, about the Republican Medicaid expansion plan. By doing so, he’s put himself in some tension with the legislative Republican leadership — but on the side of most Republicans in Arkansas.

3 thoughts on “Darr: I Would’ve Voted Against ‘Private Option’”