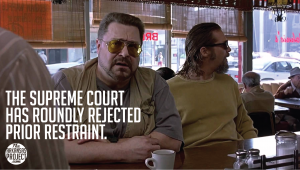 Everybody in Arkansas who pays attention to elections knows that state Supreme Court Justice Courtney Goodson’s public profile is not entirely spotless. Two years ago, Justice Goodson tried to run for Chief Justice of the Court; her previous acceptance of gifts worth hundreds of thousands of dollars (and the ensuing bad publicity it generated) almost certainly caused her to lose that election.

But I don’t think anyone predicted that Goodson would harm her reputation far more in the final days of her re-election campaign — by asking a judge to do something plainly unconstitutional.

Here’s what she did: earlier this week, she asked courts in Little Rock and Northwest Arkansas to order television stations to stop running ads she dislikes. Her theory is that the ads are libelous.

Now, it’s certainly permissible to ask courts to restrain television broadcasters from “publishing” libelous ads. But — here’s the catch — you’d have to prove that the ads are libelous. You’d ordinarily have to do that in a full-fledged trial. At the very least, you’d have to participate in some kind of a hearing that shows that you’d probably win at trial.

(The main reason that you have to have a trial, or at least a hearing, in such circumstances is that you have to let all the parties — for example, the television stations you’re trying to muzzle — have their say. To put it another way, due process of law requires that a court is supposed to listen to more people than just Courtney Goodson.)
Courtney Goodson didn’t ask for a trial — or even a hearing — perhaps because she knew that she’d lose. What she did was this: she told her lawyers to ask for a restraining order against the broadcasters immediately.

Now anybody who paid attention in law school knows that you can’t do that. (More precisely, you can’t do that while respecting the Constitution.) It’s flatly unconstitutional for a court to issue a speech-restraining order before (at the very least) some kind of hearing. A court that issued such a hearing would be violating both free speech rights and the right to the due process of law. It isn’t just lawyers who are aware that prior restraint is constitutionally indefensible – its impermissibility even has a foothold in popular culture.

It’s unbelievable that Justice Courtney Goodson didn’t know that. But she gambled that she’d find a judge who shared her willingness to ignore constitutional values. She found one, too: Circuit Judge Doug Martin. Three hours after Goodson’s lawyers filed their request for prior restraint, Judge Martin granted it. No hearing, no trial, no nothing. It’s almost as if Martin wanted to carve out a place for himself in some future law textbook as a kind of object lesson in how to fail to do your job as a judge.

Last night, John Brummett broke the news on Twitter that Judge Martin is married to an employee of Justice Goodson’s spouse. When a judge issues a clearly unconstitutional order that furthers the interests of his wife’s employer, that is something worse than the appearance of impropriety. It looks a lot more like actual impropriety.

Judge Martin’s actions are offensive for several reasons. They’re offensive not only because any competent judge would know that there are profound reasons not to use the machinery of justice to interfere with speech about the conduct of a public official in the midst of an election without even the fig leaf of a hearing. They’re also offensive because Courtney Goodson, on the basis of the papers she filed with the court, can’t even show that the ads she doesn’t like are libelous.

In her pleadings, Goodson argued that there are two different TV-commercial defamatory statements that justify the prior restraint. In both cases, Goodson is wrong.

First, Goodson argued that she was being defamed by an advertisement which alleged that she had supported a judicial pay raise. In her defense, Goodson argued that the Court held a secret vote on the pay raise, that nobody knew how she voted on that question, that she was prohibited from discussing her vote, and that (because there was no evidence of how she voted) nobody could say that she had supported a pay raise without defaming her. This argument is so defective in so many ways that it is difficult to count them all. Judges are prohibited from discussing their decisional process involving cases; there’s nothing inappropriate about judges publicly discussing administrative matters, such as which contractor they want to hire to clean the courtroom. There is no privilege that is created when judges agree not to publicly discuss the embarrassing facts of who voted for or against a pay raise, any more than a privilege is created when a couple of state senators agree not to discuss other potential political embarrassments in public. Furthermore, Goodson has to prove the elements of libel – meaning that she would have to show, for instance, that the statements she dislikes are false.

So it isn’t enough just to argue, as she does, that nobody who isn’t a justice knows how she and her six colleagues voted on a pay raise. For her argument to get any traction, she’s going to have to surrender her (imaginary) salary-discussion privilege and affirmatively state that she never supported a pay raise. For some mysterious reason, she’s apparently hesitant to come clean on this question. In short, it’s not so much that her argument doesn’t cross the finish line – it’s more that her argument never makes it to the starting gate.

Second, Goodson argued that she was defamed by an advertisement which alleged that she had received high-priced gifts from trial attorneys. (That’s what I think the argument is, anyway, although her complaint is so poorly and hastily drafted that it never bothers to state what precisely she objects to.) In her defense, she argues that she recused from all cases involving personal friendships and campaign donors, and therefore personal friends and campaign donors never benefited from her rulings. But this defense is entirely irrelevant; on the question of defamation, it doesn’t matter what procedure she set up in an attempt to insulate herself from criticism or to provide a counter-narrative. On the question of defamation, it doesn’t matter whether she voted on cases involving friends and donors at all. What matters is whether the statements are true, rather than Goodson’s arguments that, essentially, the gifts she received really deserve framing so as to be placed in a pro-Goodson context. (There is, of course, another framing – that trial lawyers as a class have gotten an excellent return on their gift investments, given Goodson’s reliable votes to hobble tort reform – but that second framing is also irrelevant as a legal matter.) If the ad’s statements are true, then attempts to spin them away are understandable as a political matter, but they are empty as a legal matter. If it’s true that Goodson accepted a lot of gifts – and that is uncontroversially true – the argument that it really doesn’t matter because she took preventive measures is (like Goodson’s first argument) a flat failure.

This affair is a huge professional embarrassment for Judge Martin. He issued an order finding that there is a substantial likelihood that Goodson would prevail on the merits – a conclusion which is either clearly erroneous or next door to it. He issued this decision despite the fact that his wife’s employer is Goodson’s spouse. He made this decision without a trial – without even a hearing. It is not an overstatement to say that such a decision can overshadow and stain an entire judicial career.

But this is also arguably a worse embarrassment for Justice Goodson. She decided to sign off on a pleading that asked a court to muzzle criticism of a public official during a political campaign in the absence of due process. Anyone who has studied this issue knows that such a request is hilariously unconstitutional. To sum up: Goodson is running for re-election to the state’s highest court, and the job qualifications for that position include both a respect for and a mastery of the law. Her endorsement of pleadings which contain groundless and absurd legal theories should be embarrassing both professionally and personally. I suppose it is an overstatement to say that one bad decision, even one that conveys a contempt for the Constitution, is a disqualification for judicial office. But I suspect that for those who believe that one bad decision could actually disqualify a judicial candidate, Goodson’s decision would be the one.