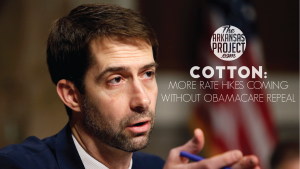 Americans will continue to see bigger health insurance premiums and a smaller set of consumer options in 2018 unless Obamacare is repealed, according to Sen.

Tom Cotton.
Although he did not support an earlier House bill, Cotton said at a Clinton School of Public Service event yesterday that repealing Obamacare should still be a top priority for Congress this year.

There’s good reasons why you want to move on healthcare reform. Insurers right now are trying to get certainty for the 2018 plan year. We are going to have open enrollment later this year for all of our insurance plans. I fear you’re going to see more rate increases. You are going to see more insurers withdrawing from counties all across the country. One-third of counties in the country only have one insurer. So there are good reasons why we wanted to move on health care first and we should probably continue to try to solve that problem even as we work on tax reform, infrastructure and the budget.

The framework of Obamacare is still fundamentally flawed. It gives too much control over our health care choices to the hands of bureaucrats in Washington D.C. You can deliver affordable care to Arkansans….about 300,000 people are on Medicaid expansion now. A lot of those people can be moved from Medicaid to private insurance if we reform our insurance regulations in a way that we give financial assistance to those who need a little bit of a hand up. The bill the House considered had flaws, but the Medicaid provisions were moving in the right direction.

Cotton conceded that he thought the likelihood of repeal legislation being passed into law had decreased from 100 percent earlier in the year to somewhere “well north of 50 percent” currently.

However, Cotton said finding a solution wasn’t something Congress could just “walk away” from.

We campaigned on this in four straight elections. We had big victories in three of them because of it. Obamacare isn’t going to get better. When we have open-enrollment season around the country, rates are going to continue to increase. Insurers are going to continue to withdraw out of counties. You are going to see more limited networks and so forth. That’s one reason we can’t just turn our backs on health care as an issue and walk away from it. The American people are going to demand we do something to fix our broken healthcare system.

One thing to keep an eye on next month will be the rate increase requests submitted to the state by Arkansas insurers who are selling plans on the Obamacare individual exchange. These requests will be due right around the time that Gov. Asa Hutchinson is expected to call a special session to ask lawmakers to pass reforms to his “Arkansas Works” Medicaid expansion program.