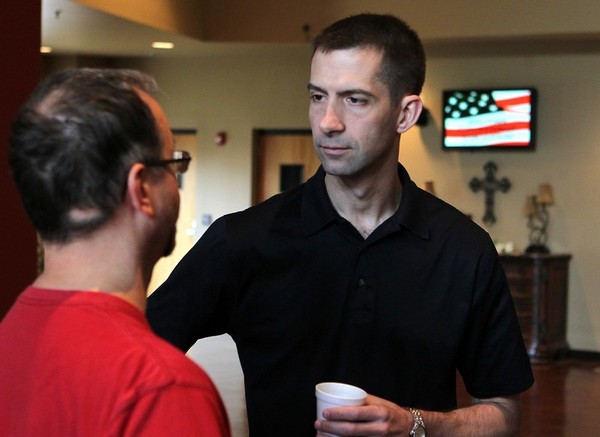 Rep. Tom Cotton, who is challenging Senator Mark Pryor, took some time out of his busy schedule to visit with reporters on a conference call this morning. The main topic of discussion — Obamacare:

I asked Congressman Cotton to tell us about two or three of his top domestic policy goals:

One way to do that: we need to reform our tax code. The tax code is too complicated, it’s bloated, it’s unfair. It’s riddled with special interest exemptions, deductions, credits. All of those are just ways to grant special favors and privileges to the well-connected and crony capitalists that other working, Arkansas taxpayers don’t benefit from. If we can eliminate all of those special interest provisions, we can reduce tax rates, we can give Arkansans their time back — they won’t have to worry about filling out all of those complicated tax forms. We can give them more of their money back so they can save, they can spend, and they can invest it on their own.
Another important step is to stop Obamacare from going into effect. The president has begun to acknowledge that that law is deeply flawed, by his own actions. He has delayed the income verification and anti-fraud provisions of the exchanges. He’s also delayed the mandate on employers to provide health insurance that Washington D.C. dictates for their employees.
And then, as I said time and time again in my campaign last year, we have to stop the out-of-control, reckless spending. In the House, we passed a budget that reaches balance in ten years. I wish we could do that faster — we’ve dug a deep hole for ourselves. But it does in fact do relatively small budget deficits in just two years and it does so without dramatic, radical cuts. We’re not talking about cutting to the bone here, we’re talking about cutting through a lot of fat that has been added during the Obama administration. Returning spending levels to where they were before the stimulus, reset the baseline for some many domestic agencies.

In response to a question from another reporter, Cotton continued to rail against Obamacare:

I think that post-recess, when we return in September, is going to be a critical time to do as much as we can to stop Obamacare from going into effect, whether that’s delaying it, whether that’s defunding it.
The president has already acknowledged that the law is not working. As important, his political coalition is fraying. For instance, you’ve seen Jimmy Hoffa of all people write along with other union leaders saying Obamacare’s not working for unions and they want it fixed now. We’ve seen the IRS who’s going to be in charge of enforcing Obamacare saying they want out of it. When we voted just a couple of weeks ago on the bills to delay the mandate on individuals as well as to codify the president’s delay of the mandate on employers, the House Democrats split. I think we got 30 or 35 House Democrat to vote for us.
So, as the law comes closer to going into effect, the political coalition that has supported it…is fracturing. And that gives us an opportunity to either defund it or delay it — especially the most critical parts. Those exchanges that are going to be ‘open season’ on the American taxpayer, as well as the mandates on individuals and on businesses that are not just hurting our health care system, but hurting our economy.

If Tom Cotton is elected to the U.S. Senate, I think it’s safe to say he will be a strong, articulate messenger for fiscal conservatism.