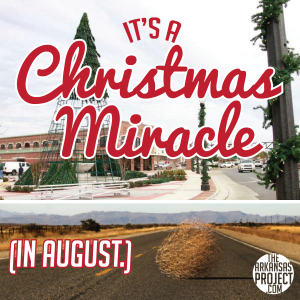 I admit it: every now and then I wonder if I’m too cynical about what government can accomplish. I was having one of those days yesterday before I came across a story in the Log Cabin Democrat about Conway’s overpriced and underwhelming Christmas tree.
You might remember that last November our former colleague, Nic Horton, put aside his Thanksgiving leftovers and called the 54-foot Christmas tree bearing a $130,000 taxpayer tab a “ridiculous waste of taxpayer money”; he also criticized the city council for waiving competitive bidding on the project.
He then followed up with a post entitled How Government Should Do Stuff With Christmas Trees, which may be the most comprehensive policy paper ever written on the subject of how local governments should purchase Christmas trees. (Spoiler alert: they shouldn’t.)
But our past generosity in offering policy guidance to Conway public officials has, for some reason, failed to resolve the city’s ongoing Christmas tree crisis. Here’s the newest development: the city couldn’t even make it to Labor Day before new problems with the Conway Christmas tree emerged.
From the Log Cabin Democrat:
Conway’s large artificial Christmas tree has had a complicated summer that’s left the City Attorney looking into civil remedies against its maker.
In an email today, Mayor Tab Townsell outlined what’s happened since the tree was taken down in January. As per the agreement between the city and the tree’s manufacturer, Get Lit, Get Lit took the tree back to its shop in Springdale to fix a problem with some sections of the tree not lighting up.
Unbeknownst to the city, Get Lit subsequently went out of business. “Their phone was disconnected. Their office[s] were locked. And we didn’t have our Tree,” Townsell wrote.
“Through the efforts of our Parks Director Steve Ibbotson and Chief of Staff Jack Bell, the City Attorney’s Office, First Security Bank of Northwest Arkansas, Gary Jiles, Attorney, of Conway, and some almost cryptic communications with the proprietors of Get Lit, the city was able to find and secure the Christmas Tree.
“The tree is in the city’s possession. Its shortcomings, failures, deficiencies, and problems were apparently left completely unaddressed by Get Lit. It is seemingly even a little worse for wear from its pointless sojourn back to northwest Arkansas. Contrary to every hope of this business transaction, Get Lit neither delivered a tree that worked as promised or delivered on its promise to fix the tree. I feel this is failure is a full breach of the promises made in the purchase of the tree and thereafter. I have asked the City Attorney’s Office to pursue any and all remedies.
In short: not only are Conway taxpayers footing the bill for a $130,000 mega-Tannenbaum, but it also appears that half of Conway’s bureaucracy was occupied this summer tracking it down — after the highly qualified company, that Conway bureaucrats thought well enough of to give it a no-bid contract, skipped town.
Mayor Townsell also told the Log Cabin Democrat:
… I wish I had better news,” the email continues. “It seems we can’t find a break with this tree. It was a lemon from the start. … It could be said this could have been avoided by bidding the tree. No, a lower price might have resulted.  However, it would not have guaranteed performance. Construction lawsuits wouldn’t exist if bidding guaranteed performance.
Townsell is correct that competitive bidding wouldn’t have “guaranteed performance.” Indeed, the only guarantees in life are death, taxes, and screwups related to the Conway Christmas tree. However, competitive bidding forces government to consider a variety of vendors: that’s a practice which makes it much more likely that taxpayers get better value — a practice that one might suspect would create better results than just handing over $130,000 to a shady-sounding business called “Get Lit” (think of that name for a moment: couldn’t they see this coming?) and hoping for the best.
According to the Log Cabin Democrat, the Conway city attorney hopes “Get Lit” will either refund Conway’s money or make appropriate repairs. At this point, it looks like it will take a Christmas miracle for that to happen.