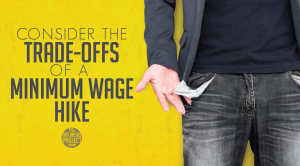 Voters will go to the polls shortly and decide, among other things, whether to increase Arkansas’s minimum wage. While advocates for the minimum wage hike are selling it as a painless way to give workers a raise, the reality is much more complicated. In fact, there is a lot of evidence that indicates that a higher minimum wage will actually harm many workers.

This is an issue discussed in a recent Democrat-Gazette op-ed by Dr. Thomas Snyder. He is an associate professor of Economics at the University of Central Arkansas who also works with the Arkansas Center for Research in Economics. In his op-ed he acknowledges that some studies have concluded that minimum wage increases do not lead to more unemployment. However, he notes that there are also many studies that do conclude what common sense tells you: when you increase the cost of labor, you get less of it.

He writes that this is especially pronounced for African-American workers:

A more recent survey of the literature by David Neumark and William Wascher for the Institute of the Study of Labor found that the “sizeable majority” of studies correlate increases in minimum wage with increases in unemployment. A 2011 study by William Even and David Macpherson for the Employment Policies Institute had 600,000 observations and found minimum-wage increases caused disparate harm to African Americans. A 10 percent increase in the minimum wage resulted in a 6.5 percent decrease in African-American employment.

Dr. Snyder goes on to note that the large minimum wage increase being considered in Arkansas makes it even more likely that it will hurt workers:

Note that Arkansas is proposing to increase its minimum wage from $8.50 to $11, or almost 30 percent. This is a very big jump. The model by Even and Macpherson would predict a decrease of black employment of 19.5 percent. Researchers have not studied such a big increase, though–because it’s never been tried.

What is often overlooked in the debate over the minimum wage is how it not only regulates what employers can pay, it also regulates what employees can accept. By mandating a minimum wage at a certain level, it prohibits employees from accepting a job that pays less. As Dr. Snyder writes, “Booming economies don’t boom forever. When the economy slows or stagnates, $10-per-hour jobs are better than no job. Do we really want to make $10-per-hour jobs illegal in the entire state of Arkansas?”

Ultimately, it is up to Arkansas voters to decide if they want to embrace such a large public policy experiment. If they do, they should keep in mind that this will have a real effect on many workers. That effect may not always be positive. In fact, it may be very negative for some. Dr. Snyder concludes with a thought that should be considered before anyone goes into the voting booth tomorrow: “Some workers will get a raise to $11, while others will get a pay cut to $0. We can’t say what the exact numbers are, but voters should have this tradeoff in mind.”