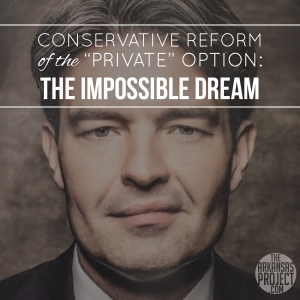 What is the future of the private option? How should we evaluate what it does and what it can do? These are key questions facing legislators as they consider renewing it this year.
In a recent interview, state Senator David Sanders, the main legislative backer of the private option, admits the private option isn’t conservative. But then he adds: don’t judge the private option on what it does; judge it on what it could be. This is a creative method of evaluation; unhappily for Sanders, it is not a particularly good one. Sanders is a gifted advocate, but the public shouldn’t be fooled into using his grading system to evaluate this extremely flawed government program.
The proof that the private option is flawed comes from Sanders himself. When asked if it was conservative to spend federal money on the private options, Sanders replied, “Is it conservative to spend it only in a vacuum? No, it is not. But, to do it with reforms in mind and to prove what we are proving now, I think it is.”
What reforms does he have in mind? Whatever he wants to do, the state can’t make sweeping changes to the private option. That’s because the private option is a Medicaid program. As such, any changes to it must be approved by the federal government (check out this paper for more details). There are federal mandates written into law that govern it. There are also reams of federal regulations that spell out in exact detail how states must run their Medicaid programs.
The Obama Administration has shown little willingness to approve any type of Medicaid reform that would introduce conservative ideas into how states manage their Medicaid programs. Even under the Bush Administration, reform pilot programs had a very limited scope and reach.
Sanders seems to acknowledge that the private option is currently a flawed program. He argues that it is worth supporting because it will evolve and change over time, and that he wants to use it as part of “an overall drive to health reform.”
That’s an exceedingly optimistic view of how the private option can evolve. Since it is part of the Medicaid program, state legislators have very limited freedom to change it. In order to move to a more consumer-oriented Medicaid program (which is, as I understand him, Sanders’s goal), then you probably need a change in the federal law governing Medicaid as well as a change in presidential administrations.
Sanders added that he wants to change health care in the self-insured marketplace (where companies, in essence, act as their own insurers instead of buying health insurance coverage from an insurance company). He’s right that this marketplace needs reform. But, like Medicaid, companies that self-insure are governed by federal law. The state cannot use the private option as a wedge to change this marketplace, any more than it can use it as a wedge to change the basic structure of Medicaid.
Senator Sanders has some ambitious goals. He makes impressive-sounding statements. But he almost certainly can’t accomplish the type of reforms that he is talking about. He’s a state legislator. If he wants to make Medicaid a consumer-directed program, then he needs to run for Congress (or President). He needs to be in Washington, D.C., not Little Rock.
During the last election, voters were not kind to private option supporters. Because the private option needs to survive a 75% spending vote in the legislature to remain alive, Senator Sanders is scrambling to shore up support. He’s talking up the conservative reforms he’d like to make to the program. Although Sanders is more vague than I’d like about what reforms he favors, state Sen. Jonathan Dismang recently suggested adding a work requirement to it. However, as a paper that I’ve authored and that AAI will soon publish will point out, the state can’t impose a work requirement on Medicaid recipients. That seems to be the pattern for private option supporters: suggest unworkable or unrealistic reforms for the future to keep the program alive today. That’s what we saw with the health savings accounts that were supposed to be part of the law, but failed to live up to the promises made about them.
The diversionary strategy of private-option supporters is a good way to keep the private option alive. Just claim that, while it’s imperfect, we need to keep it going for just a little longer in order to pass some great reforms someday soon. However, in politics, past performance is one way we judge future results: the private option must be evaluated on what it does today, not on vague promises about the future. However, if you want to evaluate it based on what reforms could take place, then you must consider the realistic future of the program and the legal limitations on any reforms. Whatever method you use, the private option gets a failing grade.

3 thoughts on “Conservative Reform of the Private Option: The Impossible Dream”