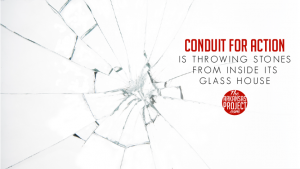 Criticizing elected officials is part of the job for think tanks, journalists, and public policy organizations. It is fair to criticize elected officials when they depart from the platforms upon which they ran for office.

Conduit for Action has made a practice of this: see, for instance, its recent blog post, in which it alleges that Governor Asa Hutchinson has strayed from the state Republican “Principles and Platform.” Rock-ribbed Republicans may occasionally have their differences with the governor, but it is quite strange to see such charges coming from Conduit for Action.

That is because, typically, the only people who care whether someone diverts from a party platform are the ones who subscribe to that platform. Conduit for Action is on shaky ground when it proclaims itself as the arbiter of GOP platform fidelity, even though it routinely wraps itself in the flag of GOP orthodoxy. In its blog post, it proclaims that “although CFA is not a Republican organization, it uses the Republican Principles and Platform as its playbook for its positions on smaller government, taxes, and economic freedom.” It even underlines this sentence for emphasis. Maybe Conduit for Action actually believes this; if so, it should read the Principles and Platform document more closely.

This is from the 2016 Arkansas Republican Party platform:

We believe health care costs can be reduced by tort reform. Medical liability regulations and statutes should be revised by limiting the circumstances under which such cases may be properly pursued and the extent of damage claims involving pain and suffering.  As such, we strongly support medical tort liability reform through an amendment to the state constitution.

Here’s a section from the national GOP platform:

Medical malpractice lawsuits have ballooned the cost of healthcare for everyone by forcing physicians to practice defensive medicine through tests and treatments which otherwise might be optional. Rural America is especially affected as obstetricians, surgeons, and other providers move to urban settings or retire in the face of escalating insurance premiums. Many Republican Governors have advanced the legal reforms necessary to reverse that trend. We support state and federal legislation to cap non-economic damages in medical malpractice lawsuits, thereby relieving conscientious providers of burdens that are not rightly theirs and addressing a serious cause of higher medical bills.

Indeed, Conduit for Action notes that “it is the small business owner who is most at risk from ridiculous awards and frivolous lawsuits.” Oddly, however, the organization refuses to back the one live proposal that would give litigation relief to these small businesses.

Why has Conduit been fighting so hard against tort reform in Arkansas? It opposes SJR 8, which would amend the state constitution to give legislators power to enact tort reform. This amendment would address the problems that Conduit for Commerce rightly recognizes:

It is paramount to keep in mind that tort litigation drains billions of dollars from the economy each year and that innocent business owners are often stuck with unrecoverable losses defending frivolous claims. Capping damages, reducing safe harbor periods, and mandating sanctions for frivolous claims are a step in the right direction for Arkansas and will help level the playing field for small business owners and strengthen the economy.

To address these issues, the organization’s founders have explained that they favor tort reform generally. According to them, there are just a few aspects of this particular tort reform measure that make it unsatisfactory.

Conduit is well within its rights to advocate for or against anything it desires. But it is hard to take Conduit seriously when it castigates Gov. Hutchinson for straying from the GOP platform while it is manifestly guilty of doing so itself. Perhaps someday Conduit will live up to its commitment to, as it says, use “the Republican Principles and Platform as its playbook” and come out in favor of SJR 8 and real tort reform. If it isn’t, then it should pick another set of talking points for its attack on Governor Hutchinson.

Conduit’s history of inconsistency on tort reform deserves further examination. In future days, I will write a bit more on its two-faced anti-tort-reform activism. I am sorry to say this — but there are grounds for concern that Conduit’s repeated resistance to one tort reform proposal after another is not based on conservative principles.