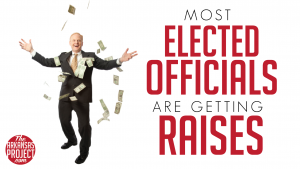 Tim Griffin’s salary was exempted at his request.

Barbara Graves, a commission member, defended the raises during the Tuesday meeting.

This is a cost-of-living [adjustment]. This is not a significant raise. I think it’s deserved by everybody equally at this time. Next year, depending on what happens, we could certainly look at different percentages for this different groups. We took no action last year and this is just a basic cost-of-living raise.

Other public officials argued against the pay increase to no avail.

Senate Minority Leader Keith Ingram said in a public comment letter to the commission that the Legislature was evolving into a full-time job.

Ingram said he understood that salaries for elected positions considered full-time needed “review lest they fall substantially behind their peers in other states.”
However, legislative salaries and the Lieutenant Governor’s shouldn’t be raised this year, according to Ingram.

My concern is that legislators will evolve to full-time politicians something the drafters of our constitution never considered.

Considering the fragile status of the state’s budget, the governor has already cut the last two month’s budget by $70 million and next year’s budget by $43 million. I would ask that you postpone any raises for the coming year.

A spokesman for Secretary of State Mark Martin said Martin “does not feel that a pay increase is warranted.”
The spokesman said:

Like the Lt. Governor, Secretary Martin does not feel that a pay increase is warranted. In the event that an increase is made, he would refuse to accept it and would instead donate it toward the purchase of new election equipment.

Griffin thanked the commission after the meeting for exempting his position from the pay increases.

Griffin said in a statement:

I was unable to attend your meeting this morning to offer public comment because I am out of state on Army orders, but I greatly appreciate your time and consideration. Thank you for maintaining the lieutenant governor’s salary at its current level.

The Independent Citizens Commission meets annually to determine the salaries of state elected officials. They will not meet again until April 2018.