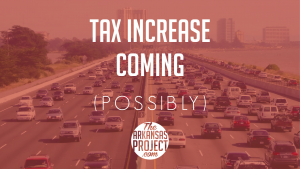 A plan that could include a tax increase on Arkansans should be put before voters in 2018, according to the Arkansas State Highway Commission.
The commission voted unanimously yesterday to pursue a ballot initiative to raise more revenue for Arkansas roads and highways.

How the state would raise that revenue remains to be seen. Options discussed during the meeting include raising the gas tax, adding a sales tax onto the wholesale price of gasoline, or transferring revenue out of the general budget to fund highway and road construction.

Scott Bennett, the director of the Arkansas Highway and Transportation Department, said during the meeting yesterday:

We need to know whether to go forward. If you say don’t go forward, we’ll be finished with the meeting in about ten minutes.

Unfortunately, the meeting wasn’t finished in ten minutes — so the commission will continue developing a highway plan throughout the summer that could mean higher taxes for Arkansans.

In early January we would need to submit the ballot language to the Attorney General. They have to approve the contents of the overall ballot title. We’d need to begin developing the language in the early part of November.

During a special session last year,  the legislature (and Gov.

Asa Hutchinson) found a way to increase funding for highways without raising taxes.

Gov. Hutchinson now wants highway funding to be increased again — this time, by adding a 6.5 percent sales tax on the wholesale price of diesel and gasoline. This same plan died in the previous legislative session.

Arkansas already has the highest state gas tax rate in the region (21.8 cents per gallon) when compared to surrounding states. Arkansas voters approved a half-cent sales tax increase in 2012 (set to expire in 2022) to pay for highway improvements.

It would appear that the highway commission believes that voters’ generosity knows no bounds when it comes to paying more taxes to fund highways.