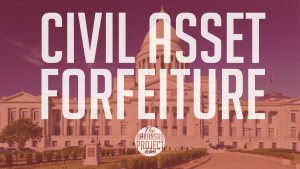 It turns out that Arkansas can longer say “Thank God for Mississippi” — at least with respect to civil forfeiture reform.

Linda Collins-Smith that would have required law enforcement to get a criminal conviction before property could be taken through civil asset forfeiture failed in the Senate, late in the 2017 session.

Debate on the issue revolved around a 2013 case in Hot Spring County. Here’s the backstory:
Guillermo Espinoza was driving to Texas with his girlfriend in July of 2013 when he was pulled over by the Arkansas State Police. Despite finding no contraband, the police seized the $19,894 in cash. Espinoza also provided paychecks and tax records showing the cash wasn’t drug money and was earned lawfully. The Court of Appeals ultimately upheld the forfeiture, essentially because it determined that Espinoza’s attorney had missed a filing deadline. The lower court’s decision was especially strange, given that the prosecutor had previously attempted to end prosecution of the action — but the trial court refused to grant the prosecutor’s request to stop the prosecution. In fact, the judge in that case, Circuit Court Judge Chris Williams, was so eager for the prosecution to prevail that he made the prosecution’s case for it while sitting on the bench, concluding that the state — which was no longer trying to prove its case — had proven it anyway.

Although the case has been in the media for years and there are court documents online to find out what happened during the case, there was apparently some confusion about the actual facts of what happened.

The state of Arkansas did indeed seize approximately $20,000 from Espinoza, according to the Arkansas Court of Appeals.

Unfortunately, opponents of Collins-Smith’s legislation released a memo that muddied the water about this basic fact. According to the memo, Espinoza and Hernandez (Espinoza’s companion) were “allowed to leave with the money on their person and vehicle.”
It looks like the memo might have been carelessly written or carelessly interpreted. For instance, one possible interpretation of this language is that Espinoza was allowed to leave with all the money he was carrying before he ever encountered law enforcement; another possible interpretation is that a great deal of money that Espinoza had been carrying in a bag was seized permanently, but that he was allowed to leave with other money that he had been carrying on his person.

Collins-Smith said the memo was an attempt to mislead the legislature:

I think there was an intent to mislead the legislature, because why else would they send that out? It’s not true. He didn’t get his money back. I think it’s a horrible thing to keep people’s assets unless they’re guilty of something.

Bart Hester voted against the legislation, because he doesn’t think Arkansas “law enforcement and prosecutors” have been abusing civil asset forfeiture.

Hester said on the Senate floor that Espinoza and Hernandez actually got to keep their money after they were released.

At the end of the day when this was all over when they were released they actually got to keep their money. The only thing the police kept were their phones.

Although in an interview Hester assured us he wasn’t confused about whether Espinoza’s money was seized by the state, he said he couldn’t remember if he’d been told Espinoza was allowed to keep the $20,000 after a reporter told him that money was actually seized.

I was just reading the report that said they were able to keep the money X,Y,Z and it said their money. I don’t remember if it said the $20,000 or not.

From the evidence that I was provided, of course it’s like anything in Little Rock…you’re told one story and then you’re told the rest of the story so you have to make a decision.

Although I think Hester is a good legislator overall, it would appear to me that he made the wrong decision on this issue — based on an ambiguous memo put out by opponents of civil asset forfeiture. The bottom line is that the $20,000 seized from Espinoza wasn’t returned to him “at the end of the day” — even though he was never convicted of a crime. Due to the Senate not passing civil asset forfeiture, this kind of violation of property rights will be allowed to continue in Arkansas.

One thought on “Civil Asset Forfeiture Bill Fails Due To Misinformation”