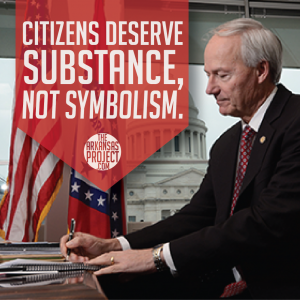 What’s more important: what a bill will actually do, or what the bill symbolizes in the larger culture?
That’s the question at the heart of the debate over HB 1228, the Religious Freedom Restoration Act (RFRA).
As my previous post noted, the legislation is fairly modest: “The bill merely says that if the state substantially burdens someone’s religious beliefs, the state needs to have a good reason to do so.”
You certainly wouldn’t think this given the rhetoric surrounding the legislation. Walmart has said it would “undermine the spirit of inclusion” in Arkansas. One minister even said that “It is blasphemy. It is an abomination, and it is an affront to the gospel of Jesus Christ.” Charges of hatred and bigotry are common in the discussion over this bill.
This type of rhetoric is a way of short-circuiting public discourse over public policy. After all, no one supports hate or bigotry. So if the opponents of this legislation successfully paint it as advancing these things, then the debate is over. We don’t get to discuss the actual text of the legislation or what its real-world impact might be.
In other states with this kind of law, there is no green light for anti-gay discrimination. University of Virginia law professor Douglas Laycock notes, “There are hardly any cases about discrimination, and nobody has ever won a religious exemption from a discrimination law under a RFRA standard.”
So why the uproar?
When the federal RFRA was enacted, it was Democrats who championed the law. But that has changed in recent years, as Reason magazine points out:

This dramatic shift in attitudes has less to do with the substance of the statute, which is similar to the federal version that has been around for more than two decades, than with the perceived motives of the law’s supporters. Progressives who used to defend religious freedom have turned against it because they see it as a cover for conservative causes.

We see motives being questioned in other areas of public policy, too. For instance, those who argue for an expanded welfare state often contend they are compassionate while their opponents are selfish. This is how many public policies take on a symbolic value that goes well beyond their real-world impact. That’s what has happened with RFRA.
Governor Hutchinson should evaluate HB 1228 on its merits, not on its symbolism. If he doesn’t like what the law will actually accomplish, then he should veto it. But issuing a veto in order to send a symbolic message is very dangerous.
It’s unclear exactly why Governor Hutchinson is urging lawmakers to amend the bill. He said he has some issues with its language. Fair enough. But he also said, “This is a bill that in ordinary times would not be controversial. But these are not ordinary times.” That sounds like he’s worried about the symbolic, not the substantive, issues with the bill.
Giving into the temptation to govern based on symbolism means that facts no longer matter. Such behavior encourages opponents or supporters of legislation to compete at weaving a larger symbolic narrative around any given piece of legislation. Want a tax cut to stimulate the economy? Too bad, because it’s a “giveaway to the rich.” Want to trim an ineffective welfare program? Nope, because that means you don’t have compassion for the poor. Don’t want to give public schools as much as the teachers’ union demands? Then you must hate kids.
Reasonable people can disagree about the merits of HB 1228. That’s the debate that should be happening in Arkansas. But the road to good government will be closed to us if the discussion we have merely mirrors larger, symbolic issues.