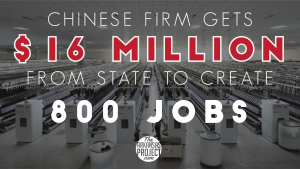 Asa Hutchinson said regarding the announcement:

Ruyi’s decision to locate in Forrest City brings with it up to 800 new jobs along with a significant economic impact on Arkansas’ cotton farmers. Our business missions to China, along with ongoing work to build relationships with the country’s business leaders, have now resulted in three companies from China’s Shandong Province announcing plans to locate operations in Arkansas. From Sun Paper to Pet Won Pet Products to Ruyi, we have established the state as a leader in foreign direct investment from Asia.

According to an AEDC spokesman, incentives the company will receive from taxpayers include:

The spokesman also said Ruyi would receive $1 million in incentives from local government.

Mike Preston, AEDC executive director, said during a press conference today that the total rebate amount would be approximately $11 million.

All in all, that means Ruyi is getting approximately $20,000 in incentives per job created. That’s not chump change, but it is much more cost-effective than previous economic development deals the state has been involved in.

Ruyi is scheduled to begin operations in Forest City in late 2017.