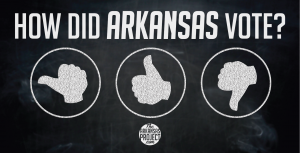 For many votes in Congress, it’s easy to predict how Arkansas’s congressional delegation will vote. The six men who represent the state in the House of Representatives and the Senate are all conservative Republicans. If you know the conservative stance on, say, tax cuts, it is probably safe to assume you know how these men will vote.

In the Senate, one vote of interest was to kill an amendment by Senator Mike Lee (R-UT) to the Defense Authorization Bill. This amendment would, in the words of the Legislative Information Service, “clarify that an authorization to use military force, a declaration of war, or any similar authority does not authorize the detention without charge or trial of a citizen or lawful permanent resident of the United States.” In other words, the amendment would prevent the federal government from justifying indefinite detention of citizens or legal residents without trial or bringing criminal charges. Both Senators John Boozman and Tom Cotton voted to table, or kill, this amendment.

In the House of Representatives, there was a series of votes on amendments to the spending bill that covers federal energy and water projects, military construction, and the Veterans’ Administration.

Louie Gohmert offered an amendment that would prohibit using any federal money to pay for regulations that would be related to offsetting what is called the “social cost” of carbon. This is an idea that carbon dioxide emissions have a negative economic impact and regulations should be crafted to offset that impact. Reps.

Ralph Norman (R-SC) offered an amendment that would cut this legislation’s overall spending by $1.5 billion. That would by the same funding that this bill provided for the current fiscal year. Reps. Hill and Westerman voted “yes,” while Reps. Crawford and Womack opposed this spending cut.

In a scaled-back attempt to control spending, Rep.

Marsha Blackburn (R-TN) offered an amendment that would cut the energy and water projects portion of the bill by 1%. This time, all four members of the state’s House delegation voted “yes.”
Rep.

Barbara Lee (D-CA) offered an amendment that would cut funding for the W-762 nuclear warhead by $65 million and transfer that money to a nuclear nonproliferation account. The Arkansas House delegation voted “no” on this amendment.

Niki Tsongas (D-MA) wanted to amend this bill to provide more money to the Office of Energy Efficiency and Renewable Energy for offshore wind jobs training. Once again, the Arkansas House delegation was unanimous in voting “no.”
Amendments like these do not often receive a lot of attention, but they are an interesting look into what our elected officials think about some key issues.