Apparently Rep. Butch Wilkins wasn’t too pleased with my reporting on his admission that he attended a KKK rally in the ‘60s. Wilkins, once again, took to his Facebook page to explain: 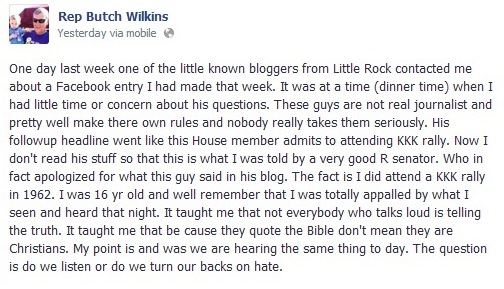 In fact, our blog is so poorly known and taken unseriously that our Wilkins story was picked up by The Daily Caller — where it was their 2nd most-read story of the day — The Huffington Post, Watchdog.org, and even LGBT News! Indeed, the story was so unread and so uninteresting, it only received over 600 Facebook shares from The Daily Caller site. And we’re not even counting the mere thousands of people who read it on our website.
But let’s not get distracted by our own insignificance. What’s really interesting about Rep. Wilkins’s recent post is that it directly contradicts several things he told me in our interview. For instance, he didn’t say he was eating dinner when we spoke — he expressly told me that he was watching his grandson, but that he had time to talk (it was 4:45 in the afternoon). Splitting hairs? Maybe. But details matter, particularly now that Wilkins is suggesting that I have somehow misrepresented his comments. I have not. Additionally, Wilkins expressly told me (more than once) that he was 19 years old when he attended the KKK rally, not 16 as he says in his follow-up post.
My intent with my original article was not to portray Wilkins as a racist. I do not know the man and the only thing I know about his racial views is that he was curious enough to attend a KKK rally in the ‘60s. Instead, my intent was to display the irony of the situation: Wilkins was accusing a newspaper columnist of being a racist while admitting that he had attended a Klan meeting. (Of course, he later said he hadn’t even read the article he was criticizing — a mistake he seems to have repeated.) This type of conduct demonstrates 1. The dangers of spouting off everything that comes through your mind on social media and 2. The destructive nature of race-baiting that is crippling our political dialogue and making us more divided. I for one am sick of it.
Anyway, I know no one really reads this blog, but since Wilkins says he received an apology for my article — which, for some reason, he thinks was warranted — I’ve decided to publish the audio of our conversation. That way, if anyone ever accidentally stumbles across this blog, they can hear it for themselves. Maybe — after not listening to it — Rep. Wilkins will have further comment.
Click here to listen to my interview with Rep. Wilkins.

11 thoughts on “Butch Wilkins Strikes Back!”