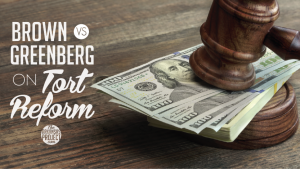 The op-eds both dealt with the question of whether SJR 8, the tort reform amendment, would strengthen or weaken the separation of powers in state government.

Robert Brown, a retired state Supreme Court Justice, wrote that this ballot amendment, if passed, would be a “severe encroachment” on separation of powers in Arkansas.

The cornerstone of our state and federal constitutions is three co-equal branches of our government–the executive, legislative, and judicial branches. The idea by our founders was, and is, that this division of power would thwart a consolidation reminiscent of a monarchy. Checks and balances would develop among the branches so that one could not reign supreme. Balance was deemed to be absolutely essential and a protection against an abuse of power by any one branch.

The problematic language of SJR8 is that the General Assembly, by a three-fifths vote of each house, may enact laws amending or repealing Supreme Court rules of pleading, practice, or procedure and may adopt its own rules to supersede Supreme Court rules. Only the right of trial by jury and substantive rights are protected. Putting aside the point that direction of how Arkansas courts should operate goes far beyond the ken of legislative authority, this proposal exceeds what a vast majority of the states have authorized by statute or constitutional amendment.
When the General Assembly seeks to control and have the final say on all rules adopted by the Supreme Court, it amounts to a severe encroachment on this delicate balance of power. The role of the General Assembly is to establish public policy and not to intrude into areas of judicial pleading, practice, or procedure.

Dan Greenberg, Advance Arkansas Institute President, responded in an op-ed yesterday by saying that SJR 8 puts an end to the status quo of judicial supremacy in Arkansas.

The court’s activism has been detrimental to self-government; for instance, its interpretations have made it impossible for the Legislature to write loser-pays reforms, because establishing loser-pays reforms require changing procedures. Once again, these are questions of public policy.

Brown claims that SJR8 expands Arkansas’ legislative powers beyond those in “a vast majority of the states.” That claim is overheated. In fact, legislatures in a majority of the 50 states play a significant role in determining judicial procedure. Arkansas’ enactment of SJR8 would place Arkansas well within the mainstream of states which assign some judicial rulemaking power to its legislature.
Brown’s most groundless argument comes when he discusses the federal Congress’ powers to write rules for the federal courts. He says that Congress “does not have the power to adopt superseding rules on its own initiative.” This is wrong. History tells us that Congress created new rules for the federal judiciary in its very first session. More recently, Congress (on its own initiative) created new federal court rules for service of process, for medical examinations, and for class-action procedures. It is currently attempting to improve rules about frivolous lawsuits through the Lawsuit Abuse Reduction Act; that act passed the House and is before the Senate.
When it comes to judicial reform, Arkansas legislators should have the same power here as Congress has federally.
Allowing the Legislature to set policy via rulemaking is not, as Brown claims, an infringement upon the checks and balances that exist between the three branches of government. In fact, if the judiciary is allowed to issue rules that control public policy but that are unchallengeable by any other government body, this looks less like checks and balances and more like judicial supremacy.

You can read Brown’s full op-ed here and Greenberg’s here.