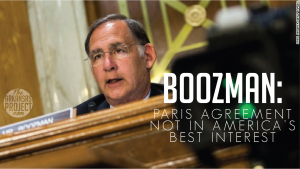 John Boozman applauded President Donald Trump today for removing the United States from a global warming agreement known as the Paris accord.

The plan entered into (under the Obama Administration) would’ve forced the United States to reduce carbon emissions by 28 percent by 2025 and 80 percent by 2040.

Boozman said in an email Thursday afternoon to the The Arkansas Project:

Entering into the Paris climate accord was not in America’s best interest and the previous administration should have never taken that action without seeking the Senate’s advice and consent. I commend President Trump for taking the appropriate steps to make a clean exit from it so we can continue to pursue an “all-of-the-above” approach to meeting our energy needs free of the significant litigation risk created by the agreement.

Typical of Obama-era actions, the agreement picked winners and losers. China, an obvious winner, is allowed to operate without making any significant changes. Meanwhile, the U.S., which was expected to make up 21 percent of all emissions reductions while subsidizing the efforts of other countries, was clearly on the losing side.

According to a study by the U.S. Chamber of Commerce released in March, the Paris climate accord would’ve required implementation of new environmental regulations that would have reduced U.S. household incomes by $160. The plan would also cost the American economy 2.7 million jobs and reduce Gross Domestic Product by $250 billion by 2025, according to the Chamber’s study.

Boozman was one of 22 Senators to send a letter to Trump in May urging him to withdraw from the agreement.

Boozman and other Senators said in the letter that remaining in the agreement would allow environmentalists to block through litigation Trump’s pledge to get rid of the so-called Clean Power Plan.

Boozman and other Senators said in the letter:

It is clear that those advocating for greenhouse gas regulations will use the Paris Agreement as a legal defense against your actions to rescind the Clean Power Plan if you decide to remain in the Paris Agreement. This is why it is so important for you to make a clean exit from the Agreement.

Arkansas Attorney General Leslie Rutledge has urged the Trump administration to repeal the Clean Power Plan, due to estimated increases in electricity rates for Arkansans if the plan is implemented.