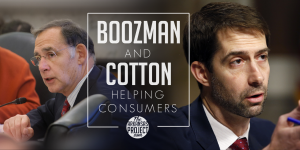 With one Senate vote, some want to make it appear that Senators Tom Cotton and John Boozman “wrecked consumer protection for bank and credit card customers.” At least that’s what the Arkansas Times contends, providing us with its trademark alarmist rhetoric about a Senate vote to overturn an obscure regulation from the Consumer Financial Protection Bureau. Bank and credit card customers will discover, however, that if they examine the regulation in question, that they are not doomed.

The rule in question prohibited banks from using arbitration as a way to deal with potential class action lawsuits. Supporters of this rule said it was necessary to prevent banks from taking advantage of customers by stripping them of their legal rights. But, of course, there is more to the story.

This regulation prevented consumers from voluntarily signing away their rights to pursue class action lawsuits in return for agreeing to settle their disputes through arbitration. Supporters of the rule claim that this was part of the fine print in bank agreements that no one reads. However, if consumers were really upset by it, and if this “forced arbitration” were causing problems, why were no financial institutions offering alternatives? It’s pretty easy to switch banks or open a new credit card. Consumers have options. And yet I have not heard of any bank or credit card offering anything like the following selling point: “We allow class action suits instead of arbitration!”
The deafening silence over arbitration has probably come about because, as Megan McArdle points out in a piece for BloombergView, arbitration has some real advantages over class action suits:

The alternative to lawsuits, arbitration, is supposed to follow the same laws as courts, and to do so more quickly and without a lot of the costly procedure. As a result, says Walter Olson of the Cato Institute, consumers are in general surprisingly satisfied with the arbitration experience, because it provides the kind of justice we imagine courts will: You sit down and tell your story in your own words. In court, by contrast, everything has to proceed according to complicated rules of evidence, with opposing counsel interrupting to tell the court that you can’t say certain things.

Class actions, the focus of this rule, are a particularly artificial, and expensive, sort of construct. Many of the plaintiffs aren’t even aware that they have a claim, and wouldn’t bother suing even if they were. Those who participate often get trivial recompense — a free mascara, say, or a credit toward future purchases from the same company. The only people who reliably benefit from the suits are trial lawyers, who take home millions. And who, it must be noted, are a traditional donor base for the Democratic Party.

As I’ve discussed elsewhere on this blog, class action suits can often end up providing lawyers with a rich payout but leave consumers with little (or very minuscule) benefits. There are numerous examples of this happening. So it’s not a surprise that trial lawyers (and the party that largely represents them – the Democratic Party) are upset by this vote in the Senate. However, there is little reason to think that consumers will be hurt at all.

In fact, given that this vote preserves consumer choice by allowing consumers to enter into voluntary contracts for binding arbitration, it seems to me that consumers actually benefit from the Arkansas senators’ stance. I prefer the government to let me to make my own decisions on this issue. I don’t like the government rigging the system to benefit trial lawyers by forbidding alternatives to class action lawsuits that give these attorneys a lot of money. It’s absurd to say that Senators Cotton and Boozman (along with the other senators who voted to overturn this rule) “wrecked” protections for consumers. All they did was make it a little more difficult for trial lawyers to use the legal system to enrich themselves.