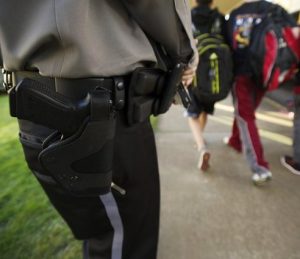 Here’s an update on a story we’ve been following for a while: the Arkansas Board of Private Investigators and Private Security Agencies just voted to allow Arkansas school districts — including Clarksville, which has been training teachers recently and Lake Hamilton who has had armed staff for over twenty years — to keep their licenses, for now.
The board met this morning and voted twice to permanently revoke licenses. However, a third vote was held later in the day, reinstating those licenses for two years.
(In August, activist Attorney General Dustin McDaniel handed down a non-binding opinion that said schools were ineligible for security licenses and their programs should be stopped. Later in August, the PIPSA board met to discuss the McDaniel opinion. They voted to side with the AG and suspend the licenses, but gave school representatives a chance to appeal at today’s meeting.)
According to the AP, no new applications for school security licensure will be accepted. However, Arkansas will be getting a new AG in the next two years, and the legislature will likely consider clarifying state code and allowing schools to defend themselves.
Nicholas Stehle, board member for Arkansas Carry, responded to today’s developments:

Originally the licensing board voted to rescind several school districts’ private security licenses; it then reversed itself. While the details of this process are still emerging, it looks as though the state licensing board has given school districts two years to keep their licenses and will not be accepting applications for any new licenses. It’s worth noting that there was never a problem with this program throughout 25 years of licensure until anti-gun Attorney General Dustin McDaniel got involved, contradicted his previous opinion regarding the definition of an “entity” under state law, and advised that it is not legal for your local school to decide on its own security plan. While there is one possible way around licensure — deputization — Arkansas Carry encourages the legislature to pass a law in the fiscal session specifically authorizing local public schools to decide on their own security plans, without the interference of bureaucrats or anti-gun ideologues like Dustin McDaniel. Such a bill should have wide-reaching, bipartisan support amongst legislators.

2 thoughts on “Board Says Teachers Can Keep Guns, For Now”