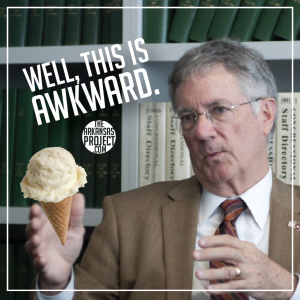 In recent months, The Arkansas Project has become widely known for dispensing free campaign advice to those in need.
For instance, in early July we made a brilliant, if unheeded, suggestion to Mark Pryor’s campaign: namely, maybe you shouldn’t be duping victims of natural disasters into appearing in a campaign ad.
Unfortunately, it looks like Democratic congressional candidate Pat Hays didn’t learn the right lesson from that episode.
Hays’s newest ad, out this week, features him boasting about all the jobs he “attracted” as mayor of North Little Rock.
One of the companies in the ad, Blue Bell Ice Cream, asked not to be featured. But it looks like the Hays campaign decided it would be cool to use the Blue Bell logo .
Doug Hutchins, Little Rock branch manager for Blue Bell, said in a recent phone interview:

Pat Hays had called me several weeks ago and had asked if he could use Blue Bell as one of his examples for his upcoming TV ad. I wasn’t really exactly sure how he was going to be using it and then after discussing it with our home office, we decided not to participate in it. I called him back and I declined his offer on that. We didn’t want it to appear or kind of be implied that we were endorsing his campaign.

Hutchins said he was “shocked” when he saw this week that Blue Bell was featured in the ad, despite his requests to the contrary.
More from Hutchins:

I talked to his campaign manager yesterday, and I had also sent him an email just saying that once we had seen the ad we were kind of shocked we were included in there, since I had said no, that we did not want to participate in it. Anyways, his campaign manager, his response to me was ‘Well, we thought we were honoring your request by not coming to your facility to film or to use whatever footage for our commercial.’ He said that’s why we went to a restaurant to actually film that. I mentioned the fact about ‘Well you were also using our company logo without permission or without our approval and we are very protective of that.’ He asked, ‘Well would it be helpful if we were to remove the logo?’ I said, ‘yeah, it would be helpful,’ but I don’t know if they have that capability. It would be helpful if they would do that.

The ad was still displayed on Hays’s campaign website and on YouTube with the Blue Bell logo when this article was posted Friday afternoon.
Readers will remember that Senator John Boozman irked the University of Arkansas, a public university, when he used its logo without their permission during his 2010 campaign.
Why would the Hays campaign use a private company’s logo in an ad when the company representative told them — well before the commercial began airing — that he didn’t want it to be used?
I’ve emailed the Hays campaign for comment, but I’ve yet to hear back.
Caterpillar Inc., another company featured in the ad, said through a spokesperson:

They wouldn’t give me any further comment beyond that.
Perhaps it is notable that the company’s CAT PAC has contributed $10,000 to Hays’s opponent, French Hill.
Regarding BlueBellGate, Hill’s campaign manager, Jack Sisson, said:

It’s troubling that 26-year career politician Patrick Henry Hays is taking credit for other people’s work without their permission. We knew his judgment was flawed when he took 22 personal pay raises as Mayor — all while raising taxes — but this latest move by Hays is truly disappointing.

To sum up, it appears that the Hays campaign’s unauthorized use of the Blue Bell logo has put Pat Hays into a sticky situation.

One thought on “Blue Bell Not Sweet on Pat Hays Ad”