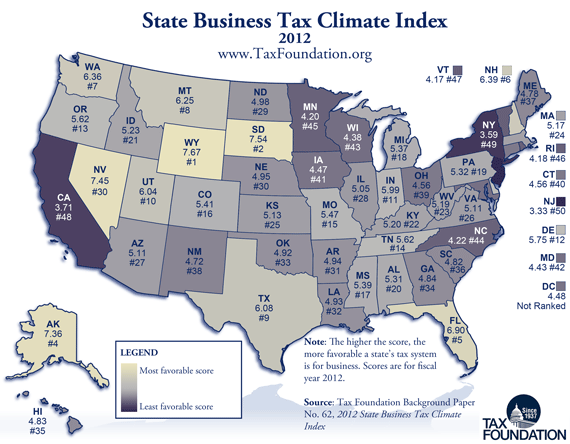 We have established before how much I like the Tax Foundation’s studies and maps as a tool for exploring tax policy. In fact, when it comes right down to it, the Tax Foundation should probably be paying me for how frequently I pimp their work around here.

As Arkansas lawmakers gear up for a legislative session devoted strictly to budget matters, they should read this humdinger of a new study ranking all 50 states by the Tax Foundation “Business Tax Climate Index.”

The index is a magic alchemical stew of corporate, income, sales, property and unemployment insurance taxes used to determine how “which states’ tax systems are the most hospitable to business and economic growth.” That is of course a gross oversimplification of how the rankings were arrived at, but if you want to learn more then go read the study yourself, Mr. Technical Methodology.

Man, I’ll bet Arkansas comes out looking like a real peach, huh? Eh, not so much—your beloved Natural State checks in at #31. If there’s good news, it’s that Arkansas has climbed one slot since last year’s report, when we ranked #32. Why, should we keep up at this blistering pace, this state will be a veritable economic powerhouse by, uh, let’s see… 2044. Huzzah!

“But, but, but taxes aren’t the only thing that drive business decisions!” is what some of you might be sputtering right about now. Well, shut up, because economist Mark Robyn, who authored the study, covers that issue:

The modern market is characterized by mobile capital and labor, with all types of business, small and large, tending to locate where they have the greatest competitive advantage. The evidence shows that states with the best tax systems will be the most competitive in attracting new businesses and most effective at generating economic and employment growth.

It is true that taxes are but one factor in business decision-making. Other concerns, such as raw materials or infrastructure or a skilled labor pool, matter, but a simple, sensible tax system can positively or negatively impact business operations with regard to these very resources.

Furthermore, unlike changes to a state’s health care, transportation, or education system—which can take decades to implement—changes to the tax code can quickly improve a state’s business climate.

Oh, but read on, because there’s even more good stuff about the dangers of tax incentives and subsidies targeting specific businesses:

State lawmakers are always mindful of their states’ business tax climates but they are often tempted to lure business with lucrative tax incentives and subsidies instead of broad-based tax reform. This can be a dangerous proposition….

Lawmakers create these deals under the banner of job creation and economic development, but the truth is that if a state needs to offer such packages, it is most likely covering for a woeful business tax climate. A far more effective approach is to systematically improve the business tax climate for the long term so as to improve the state’s competitiveness.

Robyn also includes a nicely comprehensive review of the economic debate over just how much taxes matter (pages 5-9) that you should totally check out. Print and read! Or what, you’d rather read yet another goddamn article about the Republican presidential primary or mindlessly scan the pointless ephemera in Twitter feed? Ugh, you disgust me. I don’t know how you live with yourself. Read this instead.

UPDATE: Ha ha ha ha ha! Michael Cook, a lockstep Democratic blogger who has never been troubled by an interesting or intelligent idea, sees everyone talking about the Tax Foundation study on Twitter, and leaps into action with this dandy:

Good work, Michael Cook! You have indeed Googled a report suggesting that two counties of the state boast a relatively strong economy. Case closed! Of course, and I can’t believe I have to point this out, this doesn’t exactly contravene the findings from the Tax Foundation, for a number of reasons, including that two counties are not the same thing as a whole state.

Moreover, if we just want to wave around competing studies, here’s one from the Brookings Institution (PDF) ranking the Little Rock area as one of the 20 weakest performing metro areas over the course of the economic recovery. Your move, Michael Cook!

Oh, man, can you imagine what it must be like to be Michael Cook? I can’t help but to think that I’d just literally die from the sheer existential humiliation.