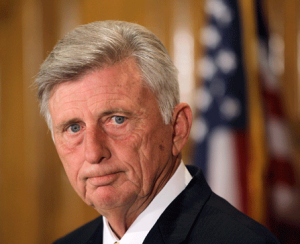 Governor Beebe continues to come unhinged at the thought of the legislature ending the so-called “private” option. Last week, there was an all-out offensive from Beebe department heads, who explained that prisons could be closed, officers could be laid off, and indeed some hospitals may be forced to close if the “private” option isn’t extended. (We asked one department spokesperson to explain why these masochistic fantasies would occur; she explained that she was only speaking “hypothetically.”) This week, Beebe dug his heels in even further.

On Monday, Beebe brought up the topic while talking to the Arkansas Sheriff’s Association:

You see, in the Land of Beebe, not adding 80,000+ people to a broken Medicaid system will somehow cost us money. (Here’s a more realistic understanding: we are “saving” money now by adding to the national debt and, in three years, those “savings” will quickly translate into spending and/or tax increases.)

Yesterday, at the Political Animals Club of Little Rock, the Gov went completely off the deep end:

A lot of them who are opposed (to the Affordable Care Act) said you can’t tell somebody something and then go back on it…If you take (the private option) away now after over 100,000 people are getting this health care, you’re going to tell them July 1 it stops, we’re going to take it away from you, then the very people that argued not to go back on stuff will sound hypocritical if they did that very same thing to over 100,000 Arkansans.

(Beebe initially called these opponents of the PO “hypocrites,” but walked it back by inserting the word “analogous” in its place.)

His point? Ending the “private” option is the equivalent of people losing their insurance plans under Obamacare after they were told “If you like your plan, you can keep it.”
I’ll repeat that, in case you missed it: ending taxpayer-funded insurance plans, that have been live for exactly one month now, is somehow comparable to the federal government passing a law that has resulted in 4.7 million Americans losing their private insurance (so far).

Beebe’s argument is — there is no nice way to say this — absurd. The ending of an entitlement program is not seriously comparable to the government passing a law that voids private insurance plans, paid for with private dollars, because they don’t comply with new “minimum standards” — like, for instance, maternity coverage for men. This was an embarrassing thing for the chief executive of our state to say, and I think even he realized it, as evidenced by his “walking back” of some his remarks. It represents a lack of basic understanding about the proper role of government and an utter desperation on the part of Beebe to give Obamacare a foothold in Arkansas.

Rep. Bruce Westerman was exactly right when he told Arkansas News Bureau’s John Lyon that these two situations are not analogous. He was also right about something else, and it’s very important to point out: we were told this program could go away at any moment. “They specifically said in the bill that it’s not an entitlement and it can be stopped,” Westerman said.

And he’s right, as Lyon points out:

The Health Care Independence Act of 2013, also known as the private option, states that “the program is not a perpetual federal or state right or a guaranteed entitlement.”

In fact, the bill goes even further than that: it requires enrollees to sign a piece of paper that says they understand the program is “subject to cancellation upon appropriate notice.” (Page 4 of the application.)

Senator Jonathan Dismang, one of the “private” option architects, told The Washington Post last spring, “The point of this language is to ensure that the individual does not think he has a perpetual right to the program,” he explained. So, what’s the problem? Everyone enrolled knows it’s not an entitlement, right?

Well, not exactly. The problem is that once government gives a benefit in perpetuity, it is very difficult — both legally and politically — to take it away. I get that. I’m not disputing that. What I’m arguing is that this talking point, this laughable “analogy” given by the governor, should be off-the-table. It should be considered “out of bounds” because, according to his own plan, the “private” option was never an entitlement. It was never guaranteed to last forever. And unlike privately-funded insurance plans, these plans aren’t paid for with “private” dollars. They’re paid for by the taxpayers. In fact, private option enrollees will pay exactly $0 for their premiums.

(It’s also nearly impossible for anyone to explain how giving people free health coverage through the Medicaid program is not an entitlement, but that’s a topic for another day.)

It’s becoming increasingly apparent that Governor Beebe will say just about anything to save Medicaid expansion, no matter how ridiculous or demonstrably false. I suppose when you’re losing every one of your arguments, it’s easy to confuse desperation with inspiration.

2 thoughts on “Beebe: Ending ‘Private’ Option Is Like Obamacare Destroying Your Insurance”