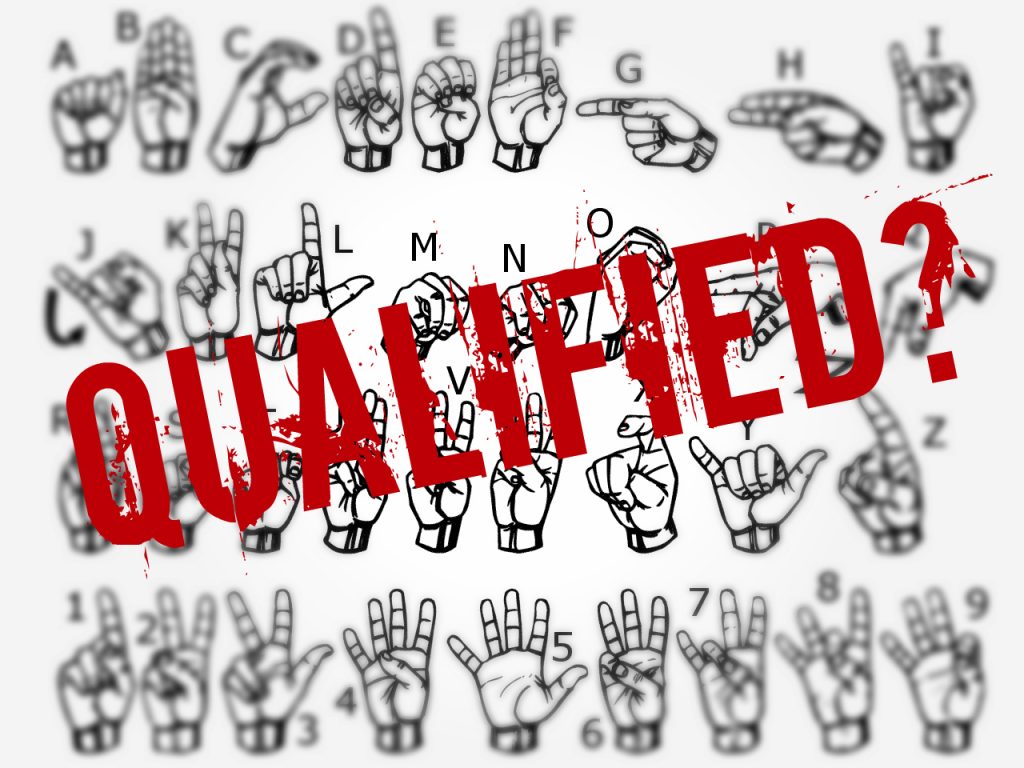 That’s the lead in to a news story from a local Little Rock media outlet who conducted a rare act of journalism regarding the recent hiring of a state sign language interpreter, Miss Clara Taylor.  According to the report, the woman is not a certified interpreter and tested near the bottom of the pool of applicants for the position.

And in another rare act of journalism, Max Brantley has acquired a document from one of the other applicants for the position that claims that, based on public records, Miss Taylor’s scores were 8th overall and she did not even apply for the position!

State Workforce Director Bill Walker says Taylor is qualified for the position because she “has a deaf family member, has signed for members of her church for the past ten years and has been a loyal state employee for more than 20 years”–which is akin to saying I am qualified to sing in the opera because my grandmother was a music teacher, I sing on the praise team, and I loyally served popcorn at the theater.

As a special bonus, Walker told the state personnel committee that Taylor is “a team player” and “passionate.”  The real reason for her hire, however, is more likely that Walker and the woman are old friends:  according to one report, the woman is a previous employee of Walker’s funeral home.  (Walker’s tenure with the state has been riddled with scandal and cronyism.)

In a letter to state Senator Eddie Joe Williams, dated April 16th, Walker says that Taylor “demonstrated the knowledge, skills and ability required by the position.”  State Representative Bryan King disagreed when I spoke with him earlier today:

“She didn’t even score 50% on the written test.  She didn’t even make a Level 1.  The deaf community is dependent upon the qualifications of the person in this position.  We are trying to get them the help that they need.  They rely on her abilities, but she could not even communicate 50% of a conversation in sign language.”

King also said the number of attendees from the deaf community at the committee meeting spoke to the seriousness of the matter:

“We had 40-50 people there from the deaf community.  It was pretty serious.”

But wait!  It gets better!  Would you, hard-working Arkansas taxpayer, be excited to learn that you are now actually paying for this woman’s sign language certification?  According to Rep. King, she will be taking an exam at a cost of $600.  She is also enrolling in classes at UALR in order to seek a national certification.  The cost for the courses is unknown at this time.  King and other lawmakers are working to acquire that information, but he did say that the bill will be passed along to the taxpayers.

King said he will be working in the next legislative session to make sure that strict qualifications are attached to these types of state positions.  “Either the passage of an exam or a national certification should be required,” King said.

This is really one of those stories that makes you stop and ask, “What the heck is going on here?”  Chances are, you’re an average hard-working Arkansan that is struggling to get by in the Beebe/Obama economy.  Now you’ve learned that the state is handing out jobs based on personal friendships, regardless of a person’s qualifications, and you are paying for their certification.  Might I suggest that this is wrong: that people should be hired based on their credentials?  Furthermore, why is taxpayer money being wasted on qualifications exams and interviews if these jobs will ultimately be handed out based on personal preferences?  What is the point in having rules and procedures if we do not follow them?  In a system where rules and procedures are flippantly discarded, personal preferences and cronyism are king.

The committee has passed this matter over to the Department of Finance and Administration for further review.  We will keep you posted on further developments.