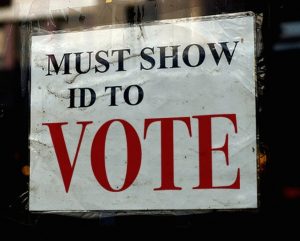 I was startled to read this recent interview with Barry Haas. Haas is one of the four plaintiffs in the ACLU’s lawsuit against Act 595 of 2013, which requires Arkansas voters to show ID at the polls.
I appreciate that the integrity of the ballot is an emotional issue – and that it sometimes causes people to make intemperate statements – but with respect to the accuracy of Haas’s statements, he could have aimed higher. Haas explained during his interview that voter impersonation was “non-existent”: more precisely, Haas claimed that voter fraud is “non-existent because when the sponsors of the legislation were asked for examples, they could not come up with one single example.”I take exception to that. Senator Bryan King, Act 595’s sponsor, asked me to discuss that very question during the very first Senate committee hearing on Act 595. You can see a snippet of that committee hearing below; in it, I testify about a 14-year conspiracy involving mass voter impersonation in New York City. When you watch this video (which, to repeat, contains a discussion of actually existing voter impersonation fraud), you’ll see a gentleman seated directly behind me, clad in a bright yellow shirt, who by all appearances is listening carefully. That man’s name is Barry Haas. Haas’s involvement in this lawsuit raises substantial questions – and not only about whether he has accurately described or understood the issues it raises. Haas is a party to the ACLU’s suit, but I believe he lacks the standing to participate in it. When Haas was asked to show ID at the ballot booth when voting in a recent election, he declined to — even though his license was in his possession — apparently because he just didn’t feel like it. This is a nice example of what I think the ACLU’s theory of the case is: namely, even the slightest difficulty in complying with ballot integrity laws – in this case, the duty of reaching into your pocket and displaying your ID in order to vote – is an example of burdensome intrusion on voter rights. I believe that theory has to be wrong.Of course, the big news about voter ID is that last night, Judge Tim Fox declared the entire law unconstitutional. He made this decision on his own say-so (as the lawyers say, sua sponte), without ever asking the lawyers or parties in the case to discuss the issue. Judge Fox’s decision was troubling both as a matter of procedure and as a matter of substance. It will certainly be appealed shortly, and there is a strong probability that it will be overturned, in part because it is so inconsistent with appellate court judgments in at least four other states. I will have more to say about Fox’s decision Monday.