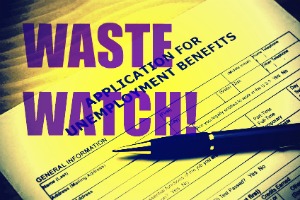 A long-awaited audit of the state unemployment insurance (UI) program was the focus of a legislative hearing Tuesday, and since that’s been a subject of interest here on The Arkansas Project lo these many months, I strolled over to see what was going down.

You’ll recall in September of last year, a U.S. Dept. of Labor report indicated that Arkansas had made an estimated $161 million in “improper” UI payments  from 2007-2010. The Dept. of Workforce Services (DWS), which administers unemployment benefits, claimed the total wasn’t that high. Lawmakers tasked the Legislative Audit division with getting to the bottom of it.

Here’s the report from Leg. Audit (PDF). Auditors and DWS staff explained that we have nothing to worry about, because the total number of overpayments is only $44 million, as of 2011. Wait, what? That’s good news? Well, OK, at least it’s better than being down $161 million.

In a nutshell, the report indicates that auditors found nothing untoward in the handling of unemployment benefits, but that DWS could do a better job of identifying overpayments and fraud on a more timely basis.

That might mean you’ll get less of this kind of stuff, from page 6 of the report:

One unclear chart in the report (Exhibit IV on page 6, pictured below right)  generated some confusion. In my initial read of the report, I was also confused, due to the poor labeling of the chart.

It reads as if the overpayment numbers are annual totals, so you’re likely to assume they should simply be added together to give you a full picture of waste, fraud and abuse in the program since 2009.  That’s how I read it at first, as I think did some legislators.

But as a DWS representative explained, the numbers represent the total overpayments outstanding at the end of each fiscal year, on a rolling basis. So those figures actually function more like an “accounts receivable” number over time, rather than a series of discrete annual totals.

The $44 million figure in the red box represents the most recent reported overpayment number, as of June 30, 2011. Some portion of that number will be collected by the state; some portion of it will be written off. (I was surprised to hear a DWS representative report that there’s no real performance collection standard to show how the state is doing at collecting overpaid benefits.)

One welcome result of all this scrutiny is that DWS is paying greater attention to detecting overpayments and fraud, and plans to get more “proactive” in tracking overpayments. The Arkansas Democrat-Gazette’s Alison Sider reports (subscription required):

Ronald Caulkins, the department’s assistant director for unemployment insurance, said the federal government wants the state to detect about 50 percent of the overpayments it believes are occurring. Caulkins said the state had been behind but has come closer to hitting that mark in the past quarter.

That’s a critical point there—the state is getting closer to identifying 50 percent of overpayments. So it’s probable the $44 million figure understates the reality. And Caulkins warned lawmakers that as DWS gets more effective at identifying overpayments, the total reported number of overpayments may become larger over the next couple of years. So we’ve got that to look forward to.

At hearing’s end, Democratic Sen. Linda Chesterfield castigated people for judging the performance of DWS director Artee Williams after the release of the DOL report. She noted that people shouldn’t “jump to conclusions about the honesty or dishonesty of anybody,” and that Williams is a “God fearing man,” though I’m unsure what that has to do with any of this.

Was Williams’ “honesty” ever a point of contention here? I don’t recall that being the case. We had some fun at his expense, but that centered more on questions of “managerial competence,” particularly given that, as a double-dipping “retired” state employee, Williams is likely pulling down close to a smooth quarter million dollars a year. I don’t think Williams is “dishonest.” By all accounts, he’s a likable and capable individual.

But when your department is responsible for tens of millions of dollars in overpaid taxpayer funds that are treated as a routine matter of course, you should probably be prepared for the occasional uncharitable judgment.

Anway, the issue goes beyond a simple question of any individual’s administration. Under federal regulations, DWS is required to determine an applicant’s eligibility within 14 days of when a benefits claim is filed, and that emphasis on haste is guaranteed to generate waste. When you add in the explosion of demand for unemployment benefits during the recent recession, the parallel explosion of overpayments is inevitable.

In that dynamic, waste, fraud and abuse aren’t a “bug”—they’re a feature.

Further Reading: A few months back, we looked at a Tax Foundation study of unemployment insurance programs that included suggestions for reform, like personal accounts for unemployment benefits. It’s worth revisiting. The more you know….!