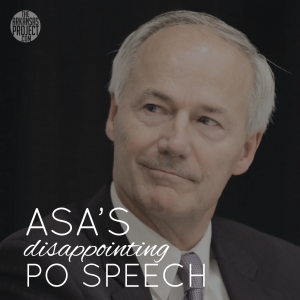 Scanning some of the reactions from Republicans after Gov. Hutchinson’s UAMS address today, I’m worried I might need to get my hearing checked. Apparently, I didn’t hear the same speech they did.
Lt. Gov. Tim Griffin said Hutchinson’s speech unveiled a “decision to end the private option.” State Sen. Cecile Bledsoe said after Hutchinson’s speech that “you could in a sense call this a wind down.”
What Hutchinson actually said was a bit more equivocal: it had some resemblance to what we’ve heard from pro-”private option” advocates over the last couple of years. Namely, his speech had plenty of language about “innovation” and “flexibility” without any specific discussion of what those words mean in practice.
Because the “private option” is a Medicaid program and any changes have to be approved by the Obama Administration, conservative “innovation” to the program is not much more than a buzzword. Indeed, sometimes it’s a buzzword that gets used so often that, if you had to take a drink every time it was used in “private option” supporters’ speeches and comments, you’d soon die of alcohol poisoning.
The reality of the private option is, as we’ve previously reported, that tens of thousands of its able-bodied enrollees don’t work at all. States like Utah have recently attempted to get approval from the federal government for a work requirement to receive Medicaid expansion benefits. That request was denied. It doesn’t seem to me like the feds are allowing for much “flexibility” there at all.
The gist of Hutchinson’s speech today was that he wants the Legislature to approve the “private option” for another two years until the end of 2016. Meanwhile, he wants to create a task force that will make recommendations about the program’s future.
But it’s fair to note that the program’s not going to end if it gets resurrected under a different name, which seems to be a possibility that the speech anticipates. For the next two years, the program’s apparently going to be reform-free: calls for an enrollment cap and wind down of the program by conservatives weren’t even acknowledged by Hutchinson in the speech.
It’s a good sign, though, that unlike former Gov. Beebe, Hutchinson is publicly discussing the fiscal difficulties that the private option poses and how the state will fund its share of the program’s costs down the line.
From Hutchinson:

The long-term costs and the solutions in terms of funding remain legitimate questions and the facts are on that side of the fence that the required match of 10 percent for the private option when it comes into full responsibility of the state will cost the state over $200 million. To put this into context, that’s two $100 million prisons. Now, I know that doesn’t get anybody excited but that $200 million is also almost one-third of the budget for all state higher education institutions. So there are budget consequences real to our institutions in education and other services that we need looking down the horizon at that $200 million cost.

Even though he’s worried about the budget of future years, Hutchinson didn’t offer up much in the way of concrete solutions. His promised task force will be facing some very difficult choices, and I hope that their answers will involve more than another two-year delay in coping with the private option.
Meanwhile, newly-elected conservative Republicans who campaigned on their opposition to the “private option” can still have their say in the Legislature by attempting to add real conservative reforms to the program — such as an enrollment cap and/or a program ending date. Whether they will remains to be seen.

One thought on “Asa’s PO Speech: Our New Task Force Will Fix It!”