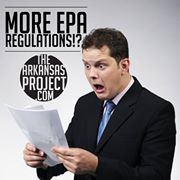 Last week, our neighbors in Texas considered how to respond to the EPA’s onerous regulations introduced earlier this summer.
From a Texas Tribune report:

Texas’s top environmental regulator suggested Thursday that the state may ignore a proposed directive from the Obama administration in June toreduce carbon emissions from power plants.
“I’m concerned that if this is not contested, if we don’t dispute this, if we don’t win, the implications … are only the camel’s nose under the tent,” Bryan Shaw, chairman of the Texas Commission on Environmental Quality, said at an event in the Texas Capitol sponsored by the Texas Public Policy Foundation.
…
If Texas ignored the most recent proposed rules, the state would simply not develop a plan to reduce carbon emissions from power plants, prompting the EPA to do so instead. It’s unclear how the federal agency could force Texas to follow the plan, though.
Lugo said that if enough states resist the rules, the federal government wouldn’t have the resources to develop plans for all of them. “A significant number of states must rise to this challenge,” she said.
The other strategy of resistance — suing the federal government — also has potential pitfalls. Texas has not won any of its lawsuits against EPA climate regulations, whichhave cost the state more than $350,000. In June, the U.S. Supreme Courtlargely struck down Texas’s challenge to the 2010 greenhouse gas permit requirements.
Though that decision was mostly a loss for Texas, some Republicans have pointed to the fact that Justice Antonin Scalia suggested that the EPA could be getting close to overstepping its authority. Both Shaw and Lugo said that while Texas should again sue over the Clean Power Plan, it cannot count on being successful. Other states and lawmakers need to get involved to force the federal government to back down, they said.
“Lawsuit action can help to mobilize public opinion and focus things,” said John Hays, an adjunct professor of energy law at the University of Texas at Austin, who was the third panelist. “But I think it’s fair to ask, what else might be done?”

Texas’s willingness to think about using its inherent authority presents quite a contrast to our state officials in Arkansas — who seem reluctant to do much of anything to contest new EPA carbon emissions standards. Studies have shown that the EPA’s new standards will result in lost jobs and steep hikes in utility rates for average Arkansans. Arkansas Attorney General Dustin McDaniel hasn’t joined a lawsuit filed by 12 states’ attorney generals. He has, however, announced that he plans to file “official comments” with the EPA. I’m sure that the “official comments” strategy will be super successful at stopping federal overreach. This approach is called “speak softly and file official comments,” I guess.
Moreover, Teresa Marks, director of the Arkansas Department of Environmental Quality, also didn’t seem very eager for Arkansas to take any serious action against the EPA.
At the General Assembly’s joint Insurance and Commerce Committee meeting today, she made vague noises about thinking outside the box, preparing to offer more “official comments” to the EPA, and bringing stakeholders to the table.
Marks said:
I haven’t spoken for or against the [new EPA] rule. Personally, as a lawyer, I wouldn’t support  bringing a type of lawsuit on a proposed rule. I think it’s premature until we see what the final rule looks like. The EPA has been given a lot of latitude by the Supreme Court of the United States and I am not convinced that what they are doing is in conflict with the Clean Air Act.
So while a bipartisan coalition of other states is beginning to take serious action against the EPA’s federal overreach, all Arkansans have to rest their hopes on is the possibility of state officials making some “official comments” to the EPA. Surely we can do better than that.

3 thoughts on “Arkansas’s Timid Response to the EPA”