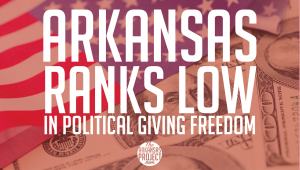 If you want to influence public policy, you can do a lot of things – you can write letters, publish op-eds, talk to your friends, or lobby legislators. You can also give money to political campaigns. This political giving is a key part of how Americans speak on political issues. According to a new ranking, Arkansas does pretty poorly in protecting this aspect of political speech.

The Institute for Free Speech just published its first “Free Speech Index – Grading the 50 States on Political Giving Freedom.” In the introduction to the report, Chairman Bradley Smith (a former commissioner on the Federal Elections Commission) and President David Keating explain why state laws should not infringe upon political giving:

When people want to change government, they donate to and volunteer for candidates, parties, and groups. Restrictions on these contributions protect incumbents and result in less speech. Before the first campaign ad runs, incumbents often have a huge advantage in name recognition. By limiting contributions, those in power can limit information published by challengers and help retain an electoral edge.

Such limits can also help protect the corrupt. When contribution limits are low, it requires the participation of more citizens to get the word out about corrupt behavior or the need for a change. But taking on a corrupt politician is something not many Americans are willing to do, because the cost of failure is often high. As the old saying goes, “When you strike at a king, you must kill him.” Low limits make it both harder and more risky to take on a corrupt politician. Meanwhile, those same corrupt politicians often try to ward off charges of corruption by demanding new laws restricting campaign speech. They benefit twice. First by the usually favorable media coverage they get for calling for limits on “money in politics.” Then a second time when new speech restrictions make it harder to expose their corruption.

According to this index, Arkansas ranks 32nd among the 50 states in terms of laws that protect residents’ ability to contribute to political speech. Here are some of the reasons the state gets a “D+” from IFS:

Arkansas’ motto may be “Regnat Populus” – Latin for “the people rule” – but that doesn’t stop the state from imposing extremely low limits on the amount its citizens can donate to the candidates and political committees of their choice. As a result, Arkansas earns a poor grade in the Free Speech Index, made worse by a successful 2014 ballot measure that imposed a prohibition on union and corporate giving to candidates. On the bright side, however, the General Assembly further amended the state’s contribution laws in 2015, modestly raising the state’s limits on giving to candidates from $2,000 per election to $2,700 per election and indexing these limits to inflation so that the value of speech doesn’t erode over time.

The state did score well because it allows unlimited giving to individuals and political action committees. If you want to delve into how IFS compiled its rankings, it is spelled out in the index (this stands in stark contrast to some groups that issue ranking but do not disclose their methodology).

It’s clear that Arkansas can do better in terms of protecting the ability of its residents to have a voice in the political process. Legislators should take a look at this report, review what is happening in states that have higher grades, then consider what reforms they might make to give Arkansans a little more freedom to give to the political causes they support.