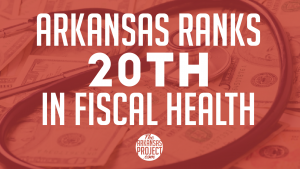 Arkansas ranks twentieth in state fiscal health–up eight spots since 2016–according to a recent report from the Mercatus Center.

On the basis of its solvency in five separate categories, Arkansas ranks 20th among the US states for its fiscal health. Its new rank makes Arkansas one of the biggest movers since last year’s edition, primarily a result of improvements in the state’s operating ratio and surplus per capita. Arkansas holds between 3.07 and 3.98 times the cash needed to cover short-term obligations, higher than the average for the states. Revenues exceed expenses by 4 percent, and the state’s net position increased by $287 per capita. On a long-run basis after meeting its debts, Arkansas’s net assets are 10 percent of total assets. Total primary government debt is $4.1 billion, or 3.5 percent of state income, slightly lower than the US average. Long-term liabilities are 33 percent of total assets, well below the US average. On a guaranteed-to-be-paid basis, unfunded pension liabilities are $38.71 billion or 33 percent of state income, and OPEB is 2 percent of state income.

According to the Mercatus study, fiscal health rankings were made up of five categories:

Surrounding states in better fiscal shape than Arkansas include Tennessee, Oklahoma and Missouri, according to Mercatus.