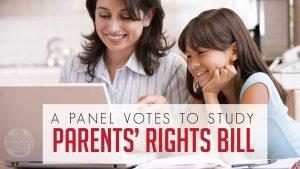 A bill protecting parental rights in Arkansas died in the 2017 legislative session, but will be brought up again when the legislature meets in 2019.

For the back story on how parents’ rights died in the previous session, you can read recent articles by Dan Greenberg here and here.

The Judiciary Committee recently passed a proposal to study the same legislation by Sen.

Alan Clark in the interim between the just-completed and future session.

Clark said in an interview with The Arkansas Project today:

I hope to show the reasons it needs to be done and the fallacies in the opposition’s argument.

Clark said he planned to run the same legislation or “a stronger version of it” in the next legislative session.

In our zeal to protect children–which is admirable–we’ve left the Constitutional rights of parents completely to the side. We need to pass this into law so that the Judiciary knows the legislative intent that parents ought to be able to be parents.

According to the bill’s language, the legislative intent is to protect a parent or guardian’s decision to grant his or her children unsupervised time to engage in activities that include playing outside, walking to school, bicycling, remaining briefly in a vehicle, and remaining at home.

Under Arkansas’s broad parental neglect law, parents could be prosecuted for these practices.

The legislation died in a House committee after passing overwhelmingly out of the Senate in 2017.

While it’s disappointing these parental practices weren’t shielded from prosecution in 2017, let’s hope the Legislature corrects this mistake in 2019.