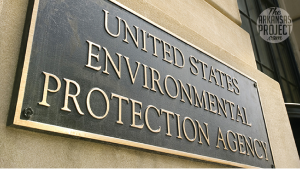 The WOTUS rule greatly expanded the federal government’s oversight of bodies of water under the Clean Water Act.

The Clean Water Act gave the federal government the power to regulate navigable waters, such as the Arkansas River. However, the WOTUS rule expanded this regulatory power to include waters connected to navigable waters such as ditches, small rivers, streams, and ponds.

It’s not hard to see how this rule would’ve led to property rights disputes between federal bureaucrats telling rural landowners and farmers how they could or could not use their own land containing these small bodies of water.

As Marc Kilmer wrote on this blog in 2015, there’s some justification for the federal government to regulate the use of large rivers that pass through multiple states. It’s harder to justify WOTUS expanding this authority to require an Arkansas farmer to ask the permission of the federal government before making changes to his/her property when it happens to be next to a small pond.

That’s why there was almost unanimous opposition from groups like Arkansas Farm Bureau and many Arkansas lawmakers.

Arkansas is a state that supports clean water and has taken great strides to protect and enhance our natural environment. As communicated in my recent letter to Administrator Pruitt, I support clear and efficient regulations and a more balanced partnership with the states. I commend the EPA, Administrator Pruitt, and the Army Corps of Engineers for withdrawing the burdensome requirements and federal overreach of the 2015 Clean Water Rule.

The full rescindment of this unlawful rule is a big win for Arkansas landowners. WOTUS has been enjoined because of the work of attorneys general, and today’s action shows a clear signal that the EPA is returning to its core mission. I look forward to working with the agency as it works to draft a new, lawful rule that protects our waters and does not harm our farmers and ranchers, who continue to be the first conservationists.

This is a wise move-and much overdue. Arkansans should make their own decisions about their own farmland-as they have for generations-without the EPA looking over their shoulders. Rescinding this rule will do a lot to restore trust between rural America and the EPA, and I commend the president for taking this step.

I applaud the Trump administration for the withdrawal of this overreaching and burdensome rule and returning power to private citizens. This is a win for Arkansas homeowners, small businesses and family farmers who will regain control from Washington of decisions on how to best use their land. I look forward to working with my colleagues and the administration to ensure we follow Congressional intent of the Clean Water Act when developing a rule that protects water sources and the rights of landowners.

Pruitt’s announcement is an admission that the federal government can protect the water sources Americans use while not trampling on the private property rights of American property owners.