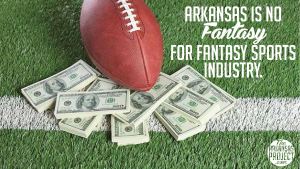 Fantasy sports not so long ago was a hobby reserved for a few diehards whose idea of a good time was watching preseason National Football League (NFL) games to see who was going to be the Steelers’ second-string quarterback.

Unfortunately, with this industry growth comes politicians looking to tax it. Arkansas legislators voted to “legalize” fantasy sports in the previous legislative session. However, this legalization was combined with an 8 percent “privilege tax.”
According to Bloomberg, only New York has a higher “privilege tax” rate on fantasy sports at 15 percent. Mississippi is tied for the second-highest rate with Arkansas at 8 percent. Nine other states have legalized fantasy sports without imposing a privilege tax.

Many states, such as New Hampshire, have legalized fantasy sports contests without imposing such additional taxes. In fact, most have opted to treat fantasy sports identical to any other business, maintaining a fair and neutral tax base.

Arkansas’ new law departs from the norm by encumbering the entertainment industry with this particularly harmful and discriminatory gross receipts tax. Although all taxes negatively affect economic growth (a tradeoff society must make for proper governance), volumes of academic literature clearly shows gross receipts taxes are some of the most harmful.
Without touching on possible social harms connected to fantasy sports, competition is fierce as more states rush to legalize the game. Singling out this entertainment industry for a discriminatory tax burden will deter entities in that field from establishing headquarters in that state. Those residents seeking to engage in this form of entertainment online will still do so—but any economic growth and wealth from the business operations will be sent elsewhere.

Young concluded by calling the new tax “discriminatory taxation” and urges Arkansas lawmakers to “seek ways to broaden their tax base, eliminate cronyism, and enact pro-growth tax relief.”
Presumably, supporters of the measure hope the tax will lead to additional revenue for the state. However, it’s not clear this will be accomplished. The Department of Finance and Administration says it is unknown how much revenue will be raised from the tax.

All in all, it looks like lawmakers passed a law making Arkansas one of the most unwelcoming states for fantasy sports without any assurance that it’ll actually be a major source of new revenue for the state. To borrow some sports terminology, this appears to be a poorly-executed game plan.