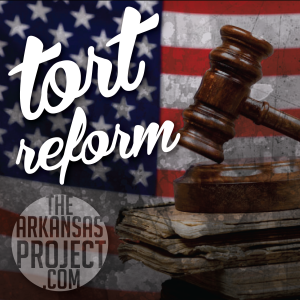 The Little Rock chapter of the Federalist Society hosted a debate on tort reform Tuesday that likely foreshadows the arguments citizens will hear in the 2015 session.

The debate, styled “Is Tort Reform Conservative?”, was held between the Manhattan Institute’s James Copland and the Arkansas Trial Lawyers Association’s Brian Brooks.

Brooks argued that tort reform undercuts local control by placing restrictions on juries, and that it devalues the lives of those seeking damages from an injury.

Tort reform to me — and as we see it played out before legislatures, state and federal, is this plain and simple: It is efforts to undermine or eliminate the ability of a civil jury to determine just compensation for victims of wrongful conduct or to determine the innocence of those accused of such conduct…to take that decision away from a civil jury. It takes many forms. The most ominous in my view is the caps on damages issue, but it doesn’t end there. Procedural ‘gotchas’ that make it a lot more difficult to ever get the merits of the case before a jury. Another is pre-emption, taking the issue away from the jury by a federal bureaucratic decision maker and then a fourth is something we refer to in legal terms as mandatory pre-dispute arbitration enforcement. All of those things stand contrary to the conservative principles that are supported by the jury trial. Caps on damages devalue life and dignity … [and] undercut the community voice.

Critics of tort reform say that the measure is a way to protect corporations from legal retribution from individuals they harm, but Copland said actually small businesses are more at the mercy of a state’s tort climate than big business. He added:

It’s not just an economic case that I’m making here. It really is about the quality of life for the people around the state. So when you look at something like medical malpractice reform…you’re talking about access to health care for people all around the state, you are talking about the ability of people … in rural areas to find specialist doctors, and ultimately you’re talking about the cost of health care as well. The same thing is true if you are a small business owner. Small business owners are particularly sensitive to the tort climate of a state. 70 percent of big business executives say we’ll consider it in location decisions, but a big business is going to be subject to suit in all the regimes all around. The fact that Wal-Mart’s in Bentonville doesn’t mean it can escape the other 49 states’ tort regimes, but a small business is not in that position and is largely going to be captive to the local tort climate.

Copland also said tort reform, if done correctly, would be a kind of tax cut for Arkansas, because it reduces the amount of money spent on the legal costs of the tort system:

It’s really a tax cut and it’s really a regulatory cut if you’re doing a tort reform that reduces the cost and increases the fairness of the liability system. Organized trial lawyers like to act as if this is a free market system, when in fact it is the use of government force to redistribute wealth from one party to another.

Copland also said Arkansas ranks 35th in the United States in terms of its tort climate.

The United States versus the Eurozone average a report last year found that the tort costs as a percentage of GDP in the United States were 2.6 times the tort costs in the European Union. Now that number is a little bit inflated by the fact that there is social health services in the EU…but clearly we are spending more on tort litigation than the rest of the developed world. Arkansas is near the bottom (in the United States and) that’s been consistent for about a decade although there has been some variance.

The event reached a low point when Fort Smith personal-injury lawyer Joey McCutchen orchestrated an appearance by one of his clients, a wheelchair-bound quadriplegic. McCutchen sought permission to ask a question, and then provided a fiery speech in which he suggested that some injuries are so serious that no damage limits would be appropriate. McCutchen then asked if his client could speak as well. After the moderator granted permission, McCutchen’s client then went into great detail about the many injuries that she had suffered. Perhaps this provides a clue to the strategy of those who resist tort reform in 2015: it looks like defenders of the status quo will do their best to divert attention away from what the best set of rules is to advance everyone’s welfare under our civil justice system, and instead use people as props and focus on emotionally wrenching anecdotes that provide little or no guidance about how best to fix the system.