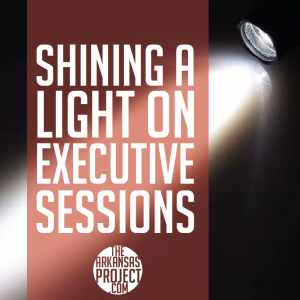 We’ve previously written about ways Arkansas’s Freedom of Information Act (FOIA) could be improved.
A story in today’s Arkansas Democrat-Gazette shows the need for more accountability in government bodies’ executive sessions, which are currently exempt from public scrutiny under Arkansas’s FOIA.
From the article:

Jefferson County Prosecuting Attorney Kyle Hunter has issued a letter of admonishment and caution to Jefferson County Election Commission Chairman Ted Davis, ruling that Davis violated the Arkansas Freedom of Information Act by holding an illegal executive session during an Aug. 25 election commission meeting.
Hunter was asked to investigate the matter at the request of Jefferson County Election Commission member Stu Soffer.
Soffer walked out of the Aug. 25 election commission meeting after Davis called for the executive session, protesting that it was being held illegally. After the executive session, Davis announced that the meeting dealt with complaints against four people who worked the May primary election.
Soffer said that Davis did not announce the purpose for the executive session before he called it, which is required by Arkansas Code Annotated 25-19-106 © (1).
Davis insists that he did announce the reason and that he did nothing wrong
I did not violate the FOIA law,” Davis said. “Everything we discussed in that executive session was absolutely related to personnel issues. There was nothing outside of that. I absolutely want to make sure the election commission has the highest integrity, and I continue to make sure it does.”
Executive sessions are permitted only for the purpose of considering employment, appointment, promotion, demotion, disciplining or resignation of any public officer or employee, according to Arkansas Code Annotated 25-19-106 © (1).

Currently, there’s no way to prove whether Davis’s account of the executive session is true, because all executive sessions are closed to the public and no notes or recordings of the meeting are taken.
And it looks like Davis — because, after all, he’s a government official and a very important person — will get the get-out-of-jail-free card that Arkansas prosecutors typically hand to misbehaving government officials.
Earlier this year, Rep. Nate Bell of Mena suggested that he will try to improve oversight of executive sessions in 2015.
From the AP:

A state representative says he’s drafting a bill that would require government boards that go into closed session to record the proceedings and have them reviewed by a prosecutor to ensure they didn’t discuss matters that should have been public.
Republican Rep. Nate Bell of Mena mentioned his bill at the end of a hearing Wednesday on expanding Arkansas’ Freedom of Information Act.
Bell said a prosecutor, or his or her designate, would have to get the recordings within 30 days and that if a portion of the meeting should have been held in public, that segment of the recording would have to be immediately released to the public.