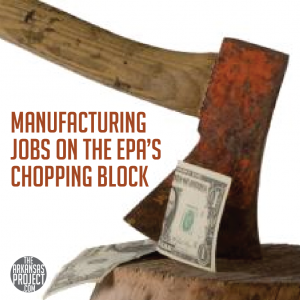 Manufacturing jobs in Arkansas will take a huge hit if the Environmental Protection Agency’s plan to cut carbon emissions is implemented, according to a recent study from the Heritage Foundation.
From the study:

Although the economic damages from the Obama Administration’s energy-stifling carbon policy will be overarching, these damages will clearly impact manufacturing jobs all across the country. Most notably, states with manufacturing-intensive economies will suffer a great deal as a result of this policy. As a result, policymakers should avoid imposing these destructive policies on such an integral component of the American economy.

The Environmental Protection Agency (EPA) announced new regulations last June that will  lead to Arkansans paying higher utility bills and steep job losses in the Natural State.
The EPA proposal mandates a 30 percent reduction in carbon dioxide emissions from electric generating plants by 2030.
According to the report, Arkansas would be one of the states hardest hit, losing approximately 7,000 manufacturing jobs if the new EPA policies are implemented. To put that into perspective, that’s 4 percent of the total manufacturing employment in the entire state!
This is just another example of the severe economic damage one-size-fits-all policies from Washington D.C. can inflict on average citizens.
You can read the entire report here.