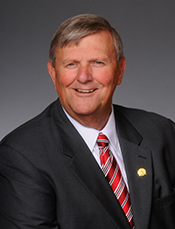 Rep. Butch Wilkins (D-Bono) admitted in a Facebook post last week that he attended a Ku Klux Klan rally in the 1960s.
According to Wilkins’ post last Sunday, “very much the same words” that were used at the KKK rally were used in a recent guest column in the Jonesboro Sun. That day, former State Rep. Jon Hubbard was the only guest columnist in the local paper. Hubbard is presumably who Wilkins was referring to:

The post has since been deleted from Wilkins’s page.
After reading Hubbard’s guest column, I contacted Wilkins for further comment. Hubbard’s article only made one mention of race and it was actually a statement against racism, calling for unity across racial lines. Wilkins initially confirmed that his statement was in reference to Hubbard. “Yeah, more or less, yeah,” he said. So, what specifically did Hubbard say that, according to Wilkins, were “very much the same words” used at a KKK rally?

I don’t know. I don’t really know. I never named Jon Hubbard. I don’t really know what it was now. I went to a KKK thing when I was probably…my first year out of high school. It was north of Jonesboro. It’s been a long time ago. But I don’t know specifically..it’s the whole hate thing, I think, that seems to be talked about more and more by some of these guest columnists in the Jonesboro Sun. The Agenda 21 stuff and all that kind of stuff. It’s just racist to me, a lot of it. And that’s where I stand on it.

Criticizing Agenda 21 is racist? That’s news to me — and it’s hard to see how that’s quite as racist as (just for instance) the KKK. Wilkins continued:

I don’t even know that I completely read Hubbard. I don’t read much of his stuff. It’s the same old crap over and over.

Wilkins then modified his initial claim that he was talking about Hubbard:

It was general. It wasn’t necessarily Hubbard. It’s just a lot of the hate stuff seems to be going on now.

I asked Wilkins how it came about that he attended a Klan meeting. Wilkins said:

Oh, I was a teenage boy and I had no idea what was going on. Somebody said ‘let’s go,’ and I said, ‘Let’s go.’ You know I never was involved in anything like that. I seen a few of their rallies over here. I spent…or, their demonstrations later on in law enforcement. We had to show up a lot of times where they were supposed to be and all that kind of stuff. That was…I was probably 19 years old, so it’s nearly been 50 years ago. So that’s a long time. But I didn’t have no interest in it. I just happened to go with another guy.

Just “happened to go” to a KKK rally? Oh, that makes sense: I mean, who hasn’t?
I will say, in fairness, Rep. Wilkins would be far from the first person in the world — or even in “the early 1960s” — to make incredibly stupid or offensive choices at the age of 19. But accusing a newspaper columnist of sounding just like a KKK speaker is, for multiple reasons, a mistake as well (even if you do have first-hand knowledge of what’s said at those meetings). It’s not a mistake that was made by a 19-year-old, but by a senior citizen who is a third-term member of the state House of Representatives. It’s especially a mistake if the newspaper column in question said nothing racist at all — and it’s not a mistake that Rep. Wilkins can defend himself against by invoking his own youth and inexperience.