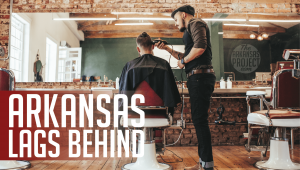 Other states, most notably Arizona and Tennessee, have enacted laws that give their states’ residents more freedom to pursue work. Now it appears that Nebraska will soon pass a bill opening the door to reform in that state. The Wall Street Journal recognized Nebraska’s efforts in a recent editorial:

Enter the proposed Occupational Board Reform Act that says the state should “use the least restrictive regulation to protect consumers.” This means, for example, that the state could use alternatives like periodic inspections to guarantee clean and safe hair salons and barber shops. That would spare cosmetologists and barbers some 16 months of training.

Nebraska lawmakers have reformed outrageous occupational licenses one at a time, but this would allow wholesale reform. Legislative committees would review 20% of existing licensing requirements annually. They’d consider whether a license is really necessary, whether the training requirements are overly burdensome, and whether the certification is abused to exclude competition. The committees would also examine whether it’s less time- and cash-intensive to get the same licenses in neighboring states.

The annual review would occur when Nebraska’s Legislature is not in session. This lessens the potential for lobbying by licensees who benefit because current rules protect their professional turf. Lawmakers would later have the option of bundling the various committee recommendations for an up-or-down vote, further insulating them from political pressure from rent-seeking guilds.

Earlier today, a large majority of legislators voted for the Nebraska proposal. A similar bill is also moving through the Louisiana legislature: it, too, passed the House today.

The Journal’s editors’ note went on to praise another piece of this legislation — it would also allow those with criminal convictions to determine if their record makes them ineligible to obtain a license prior to going through the licensing process. This would prevent someone from wasting time and money jumping through regulatory hurdles if he or she would ultimately be disqualified in the end. That is a good first step towards ending the hardship that state occupational licensing places on those with convictions. This isn’t an idea that is unique to Nebraska.

A bill in this area unanimously passed both houses of the Tennessee legislature recently.

These actions stand in stark contrast to what happened in Arkansas. Rep.

It would be nice to see occupational licensing reform legislation at least be considered on the floor of one of the General Assembly’s chambers. Legislators should have to debate this issue and, if they oppose reform, they should have to publicly defend a system that offers narrow benefits to a small group of protected workers at the expense of both the public and a wider body of potential workers. Occupational licensing reform is advancing nationwide. It’s time for Arkansas to become part of this movement.