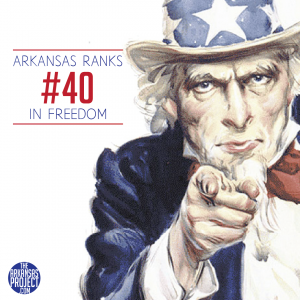 Arkansas ranks 40th in the nation when our freedom is measured, according to a study released last week by the John Locke Foundation.
From the 2015 “First In Freedom” report:

In the case of tax policy, most forms of state and local taxation have statistically significant and negative associations with economic growth. That is, the lower the tax, the better off the economy is, all other things being equal. The main exceptions are targeted tax incentives such as per-job tax credits and enterprise zones. States and localities that reduce their tax burdens in this selective fashion do not appear to experience net economic benefits. The April report also examined studies of state and local regulatory policies such as occupational licensing, permitting, zoning and housing codes, minimum wages, and emissions caps. In 68 percent of the 160 peer-reviewed studies on the subject, higher levels of regulation were associated with lower rates of economic growth.

You can read the rest of the report here.
One way legislators might improve Arkansas’s freedom would be to pass state Rep. Richard Womack’s “Right To An Honest Living” bill, which would put a check on over-eager state regulators.
However, to accomplish this, the legislature will have to ignore the groundless complaints of the special-interest groups which are currently attempting to kill the bill. If legislators capitulate to industry lobbyists, Arkansas is likely to stay near the bottom in freedom and near the top in over-regulation.