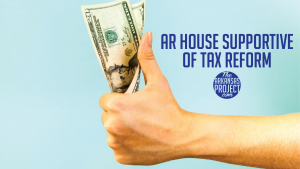 After Congress’s failure to pass legislation reforming health care, it looks like our federal representatives are going to give tax reform a try.

Marc Short, the White House’s legislative director, told Politico on Monday that tax reform legislation would begin to be crafted in September, with the goal of being signed into law by the end of the year.

I’m supportive of passing tax reform that simplifies and streamlines the tax code in a way that supports families, entrepreneurship, and small business growth in rural Arkansas communities. When you live in a town like Blytheville or Helena-West Helena, starting one new business or keeping an old one can have a big impact on that town’s viability. Keeping in mind our nation’s $20 trillion debt, I’m looking forward to passing reform that encourages growth at the local level and keeps our nation’s debt in check.

When asked about tax reform, a spokesman for Rep.

Bruce Westerman referred us to a previous statement in which he says the tax code needs to be “simpler, fairer, and flatter.”
Westerman said:

Our current tax code is too complex and discourages entrepreneurship. In order to put Americans back to work and grow our economy, we must have a tax code built for growth. Our tax code must be simpler, fairer, and flatter while closing loopholes, and helping businesses grow and employ Americans. The plan laid out by Speaker Ryan and House Republicans is a common sense way to help Americans keep more of their hard-earned money and level the playing field.

Personally, I want to speak out for competitiveness on the international front, and also this idea of the way businesses are taxed. I think that’s an important contribution I can make because of my business background.

The plan would be to drop the C-corp rate as much as they think they can and make it territorial, which means that international businesses that are paying taxes at the normal C-corp rate would no longer be double taxed when they bring money taxed abroad back into the U.S. Maybe we can also connect that to an infrastructure plan.

A spokeswoman for Rep. Steve Womack told The Arkansas Project in an emailed statement:

While all of Arkansas’s House delegation seem to be in favor of tax reform in general, the devil is always in the details. However, it looks like all of Arkansas’s House delegation is on board with the idea of passing tax reform in general. Only time will tell if Congress and the President will be able to accomplish this goal in 2017.

Republicans have already suffered a major setback in the failure of their health care reform efforts. Hopefully, tax reform discussions will end on a more positive note later this year.