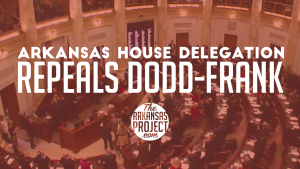 Dodd-Frank was passed to rein in big banks on Wall Street in response to the 2008 financial crisis. However, community banks in Arkansas have also had to deal with the burdens of the law. The Financial CHOICE Act repeals many of the regulations implemented under Dodd-Frank.

Bruce Westerman said after his vote yesterday that Dodd-Frank “imposed draconian restrictions on small community banks that are now failing at a rate of one per day.”
Westerman said:

It prevented everyday Americans from securing credit to purchase their first home or finance their small business. Dodd-Frank raised the price of basic financial products like checking accounts, putting further strain on cash-strapped households. Simply put, Dodd-Frank hurt hard working taxpayers and protected the ‘too big to fail’ Wall Street banks. That is why I joined my House colleagues and voted for the Financial CHOICE Act. Arkansas and other rural areas need relief and this bill provides that to consumers.

French Hill, a member of the Financial Services Committee said he saw the “pernicious effects of Dodd-Frank” when he worked as a banker in Little Rock before running for Congress.

Although smaller financial institutions did not cause the 2008 economic crisis, they have borne the brunt of Dodd-Frank’s regulatory impacts. Our Committee has spent hundreds of hours in over 140 hearings and in meetings with regulators and industry experts to put together strong legislation that will reverse the Dodd-Frank institutionalization of ‘too small to succeed’ and ‘too big to fail.’
Our bill also will increase government accountability by providing structural reforms to the least accountable federal agency—the Consumer Financial Protection Bureau (CFPB)—making it subject to appropriations and requiring comprehensive cost-benefit analysis for rule-makings. The American people want economic growth and they want a government that is accountable to them, the Financial CHOICE accomplishes both of these goals. I encourage Democrats in the Senate to work with Republicans to make sure the principles of this legislation are made into law in order to provide much needed relief for our community banks and help spur growth in our local economies.

Steve Womack said the law was “a step in the right direction to protect our community banks and credit unions.”
Womack said:

This legislation will help small businesses create jobs and give consumers more choices and access to credit. I am excited about this legislation and proud to have supported its passage in the House.

A spokesman for Rep.

A political action committee called End Citizens United says the law is a result of House Republicans being “bought and paid for by Wall Street donors.”
I think it would be more accurate to say that Financial Choice Act supporters see that well-intentioned laws like Dodd-Frank can have unintended consequences for people who weren’t responsible for the 2008 financial crisis.

The CHOICE Act would repeal Dodd-Frank’s Durbin amendment — the law that put government price controls on debit card transactions. According to multiple studies, these price controls have led to billions of dollars in profits for retailers, while taking benefits away from consumers like free checking and debit card rewards.

A study by the Government Accountability Office (GAO) in 2015 found that community banks had to “increase staff, training, and time to comply with these new (Dodd-Frank) rules.”
Frank Scott Jr., a bank executive with First Security Bank and a former staffer for Gov.

Community banks have a harder time lending to small businesses and supporting their local communities because of regulatory pressure to comply with rules that were meant for the big banks engaging in activity that proved too risky for the economy. Because of this pressure, community banks have spent resources hiring compliance staff – money that could have been used to hire bankers to partner with families, business owners, and communities in working to pursue their dreams, create opportunities, and grow their local and ultimately our nation’s economy.

You can read the vote roster on the CHOICE Act here.