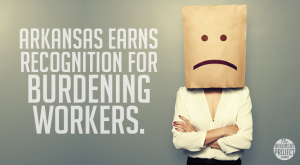 Arkansas is Number 3 – but that’s nothing to celebrate.

Arkansas recently showed up near the top of a list of states with the highest occupational licensing burdens. While some claim that no publicity is bad publicity, there is no honor in being the third-worst state in placing restrictions on worker freedom.

This list showed up in a Wall Street Journal editorial a few days ago that was inspired by the Institute for Justice’s second edition of “License to Work.” As the Institute for Justice (IJ) describes it, this study is “the most comprehensive look to date at [government] licensing burdens for lower-income occupations.”
The WSJ editors note the problems with these licensing requirements:

Stiff licensing requirements are often prohibitive for America’s working poor, keeping them trapped in low-wage, low-skill jobs. Many states also bar people with a criminal record from working in a licensed profession. Society pays the price. Researchers at Arizona State University’s Center for the Study of Economic Liberty found that in states with burdensome licensing requirements, recidivism rates increased by more than 9% over a 10-year span. In states where it was easier to get a license, the rates went down.

Nationwide, licensing drives up prices by as much as $203 billion annually. The requirements also hurt consumers by restricting access to goods and services. Louisiana has around 400,000 more black residents than neighboring Mississippi. But in 2012 Mississippi had 1,200 licensed African-style hair braiders. Louisiana, which requires 500 hours of training, had just 32, according to IJ.

This shouldn’t be new to readers of The Arkansas Project. We have written many blog posts about the issue. The Advance Arkansas Institute also published a report on the need for licensing reform last year. That report concluded:

…the evidence shows that occupational licensure often hurts the economy — damaging both consumers (who must pay higher prices) and workers (who are prevented from obtaining a job in a licensed field). And the spread of providers’ reputations over the internet is increasingly making occupational licensing obsolete as a means of consumer protection. That is why there is widespread agreement that policymakers should change course — across the nation, and especially in Arkansas. Namely, policymakers should create jobs by reducing the burdens of occupational regulation.

Legislators should pick up a copy of the AAI report and take another look at it. Adopting its recommendations will ensure that Arkansas does not show up at the top of any future licensing burden lists in the Wall Street Journal. That is one distinction the state should be glad to shed.