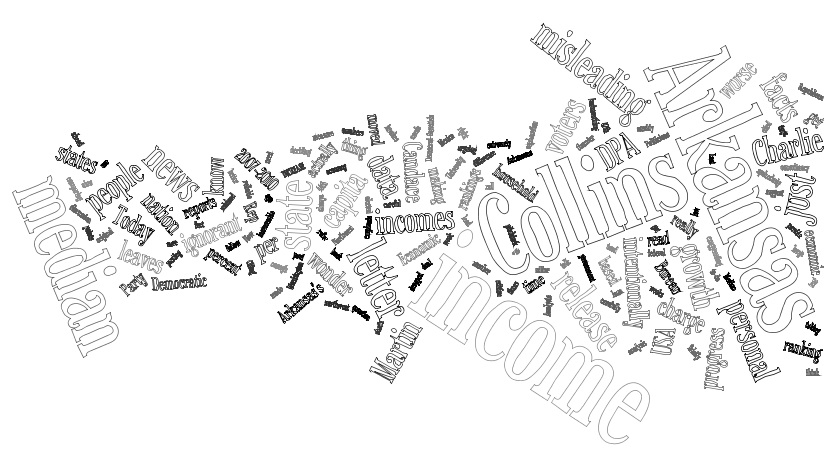 Why are Arkansas Democrats exaggerating the Natural State’s progress on income growth? Or more to the point, just how damn stupid do they think we are?

I was thumbing through the Wall Street Journal this morning, in the manner of all good plutocrats everywhere, when I came across this story about declines in household income over the last few years.

Citing a study by a Maryland-based consultancy group, the WSJ reports that 38 states saw a decline in median household income from 2007-2010, according to an analysis of Census data. Arkansas was one of those 38—in the Natural State, median household incomes dropped 2.9 percent. (Meanwhile, Washington D.C. led the nation with an 8.1 percent income INCREASE, “in large part because of federal government employment.” If you need me, I’ll be sharpening my pitchfork.)

That got me thinking: Wasn’t there a to-do just a few days ago in which the Democratic Party of Arkansas (DPA) took a Republican state legislator to task on this very question? Why, it turns out there was!

Here’s the deal: Some weeks ago, GOP Rep. Charlie Collins of Fayetteville published a letter to the editor in the Arkansas Democrat-Gazette’s northwest edition arguing that the state needs income tax reform to create jobs. Collins cited the slow growth rate in the state’s median income to suggest that Arkansas could be doing better. (For our discussion purposes, I’m pasting the text of Collins’ original letter below).

Actually, no, that’s not right. Let’s carefully read the lead of the DPA news release: it says that Collins’ letter “leaves voters to wonder if he was being intentionally misleading about Arkansas’s economy and deriding the state, or even worse, was he ignorant of the facts?”

Got that? They’re not actually suggesting Collins did all that bad stuff they just said; they’re not leveling a charge. It just “leaves voters to wonder” if there’s a charge to be made, by someone, maybe. Oh, my, this is an unprepossessing start.

“What is worse, if Charlie Collins was intentionally misleading people and badmouthing Arkansas’s progress or if he was just ignorant of the facts? He owes the people of Northwest Arkansas an explanation,” Democratic Party of Arkansas Spokesman Candace Martin challenged. “Politicians shouldn’t use these lean economic times as an excuse to falsify facts or mislead Arkansans. Rep. Charlie Collins condemned Arkansas for making no economic progress when in reality USA Today ranked our state 11th in the nation for personal income growth. It is bad enough when people from other states talk down about Arkansas, but for an elected official to do so, and falsely, is inexcusable.”

OK, here’s where it starts to get thornier. Martin invokes a USA Today ranking that says Arkansas is “11 in the nation for personal income growth.” But note the shift here: Collins in his letter writes about median incomes, not “personal income growth.” Moreover, if we follow the link to the Bureau of Economic Analysis data on which USA Today based its ranking, we see the data used is per capita personal income. So they’ve subtly changed the subject.

And here’s the thing: Per capita income and median income are not the same thing. Median numbers tend to be a more reliable measure because they aren’t swayed by extremely high or low extremes, and they’re more useful for comparing numbers over time.

Candace Martin and the DPA seem confused on these issues (that’s the charitable interpretation). In paragraph 3 of the news release, they state that “Arkansas steadily moved up three rankings in the national average for median income at a time when other states were falling” (emphasis added).

Except that’s not quite right, based upon a reading of the data that they themselves provide. The news release points us to the Bureau of Business and Economic Research at the University of New Mexico, which reports that Arkansas moved up a few slots on per capita income, not median income, from 2007-2010 (from 47th to 44th).

Now, if you just go Google “state rankings median income,” you’ll get a number of results that show Arkansas languishing around 48th or 49th, which is in line with what Collins discussed in his letter. Like this. Or this. Go ahead, roll your own. Collins wasn’t “misleading” anyone.

I think Charlie Collins does know the difference between per capita and median incomes, since he’s careful in his letter to always refer to “median income,” and doesn’t sloppily swap the terms around.

Look back at that DPA news release, in which all the accusations against Collins are leveled as rhetorical questions, rather than actually flat-out making a charge that he was being “misleading.” It seems clear the Dems recognized they were on shaky ground, or they didn’t really care, because all they wanted to do was muddy the waters of the discussion, so the facts didn’t much matter.

Or we might put it this way: What is worse, if Arkansas Democrats were intentionally misleading people and exaggerating Arkansas’s progress on income levels, or if they were just ignorant of the facts?

You know, it really leaves voters to wonder.

WHAT YOU ARE PROBABLY THINKING: “Thank you, David, for that not at all fascinating discussion of  a dispute over per capita and median income in a stupid party news release, which sounds like something Greenberg would write, because, ugh, Greenberg.”

But bear with me! There is, indeed, a point to all this! No really, there is! I think! But you’ll have to wait for the explanation as to why this matters in the EXCITING PART DEUX OF THIS POST (forthcoming!)

Letter to the Editor, Arkansas Democrat-Gazette

Thanks for your editorial calling out the disadvantage our income tax places on Arkansas workers compared with workers in nearby states. Why is there outrage when China creates a disadvantage for our workers through tax and currency policy, but not when we do it to ourselves? We’re regularly ranked near the bottom of all states for median income. We haven’t made substantial progress in decades. It wasn’t always this way. From about 1940 to the early 1970s, Arkansas improved from about 44 percent of national median income to about 75 percent.

Then we raised our income-tax rates in 1971 (with the top rate up 40 percent from 5 percent to 7 percent) and relative income-growth progress stopped. Today, Arkansas median income remains around 75 percent of national income almost four decades after the higher income-tax rates took effect. If we had left tax rates alone in 1971 and remained on the pre-tax-rise trend, the Arkansas Policy Foundation found that Arkansas median incomes would be at or above the national average by now.

The editorial highlighted two income-tax ideas to create jobs: A special deal for new residents only, and bigger exemptions for capital. How about this instead? Let’s simplify the code and give all our workers a fair playing field by eliminating the 2.5 percent and 7 percent rates. This approach lowers the rate by 60 percent on low-income workers and 14 percent on workers making more than $33,000. We won’t need to say “Thank God for Mississippi” anymore.

2 thoughts on “Arkansas Dems on Income: Intentionally Misleading or Just Ignorant of the Facts? (PART 1)”