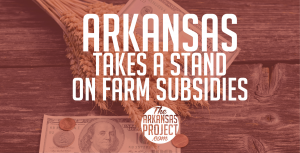 The House of Representatives recently debated (and then failed to pass) legislation governing federal agricultural programs. Representatives offered a series of amendments to this bill that touched on environmental policy, subsidies for farmers, federalism, and the Supplemental Nutrition Assistance Program (SNAP, or food stamps).

So how did Arkansas’s members of the House of Representatives — Rick Crawford, French Hill, Steve Womack, and Bruce Westerman — vote on these amendments to the Farm Bill?
Repealing the “Waters of the USA” rule
During the Obama Administration, the Environmental Protection Agency issued a rule that would potentially be a vast expansion of federal power to regulate waters in the U.S., including farmers’ ditches. Rep.

Jim Banks of Indiana offered an amendment to repeal this rule, which passed 238-173. Reps. Crawford, Hill, Womack, and Westerman all voted “yes.”
Banning animal fighting
Animal fighting, such as cock fights, are illegal in all 50 states. Not all U.S. territories ban these fights, however. Rep.

Peter Roskam of Illinois introduced an amendment to make animal fighting illegal in the territories. The amendment passed, 359-51, with Reps. Crawford, Hill, Womack, and Westerman all voting “yes.”
Allowing interstate sales of raw milk
States have different laws on the sale of unpasteurized, or raw, milk. Rep.

Thomas Massie of Kentucky introduced an amendment to prohibit the federal government from taking action to “prohibit, interfere with, regulate, or otherwise restrict the interstate traffic of milk, or a milk product, that is unpasteurized and packaged for direct human consumption.” This amendment failed by a vote of 79-331, with Reps. Crawford, Hill, Womack, and Westerman all voting “no.”
Stopping federal grants for alcohol marketing
The federal government has a program that gives grants to companies to market their “value-added” agricultural products. Rep.

Steve Russell of Oklahoma offered an amendment to prohibit this funding from being spent to market beer, wine, distilled spirits, hard cider, or other alcohol products and to rescind the $8 million provided for that purpose. That amendment failed by a vote of 54-356, with Reps. Crawford, Hill, Womack, and Westerman all voting “no.”
Ending bioenergy subsidy program
The federal government also subsidizes bioenergy programs. Rep.

Andy Briggs of Arizona wanted to end these subsidy programs, but the House voted against him, 75-340. Reps. Crawford, Hill, Womack, and Westerman voted with the majority to preserve these subsidies.

Tom McClintock of California wanted even stronger rules. Under his amendment, states would only be allowed to exempt 5% of their food stamp recipients from work requirements, married parents and single parents would have the same hours-per-week work requirement, parents could only be exempt from the work requirement if their child was under 3 (instead of 6), and food stamp recipients would have to be vetted by the federal E-Verify program to check their legal residency status. This amendment failed 83-330, with Rep. Westerman supporting it but Reps. Hill, Crawford, and Womack opposing it.

Ending farm subsidies
The federal government has a variety of subsidy programs that give taxpayer money to farmers and agribusinesses. Rep. McClintock offered an amendment to phase out these programs. That amendment failed by a vote of 34-380. Once again, Reps. Crawford, Hill, Womack, and Westerman voted with the majority to preserve these subsidies.

Reforming sugar subsidy programs
The federal government props up the U.S. sugar industry by imposing limits on production, placing a tariff on foreign sugar, and subsidizing efforts to turn sugar into ethanol. Rep.

Virginia Foxx of North Carolina introduced an amendment that reform these government supports for sugar producers, but it failed 137-278. Rep. Womack voted in favor of this amendment, but Reps. Crawford, Hill, and Westerman opposed it.

As you can see, the Farm Bill touched on many subjects, but its main focus is farm subsidies. If you support these farm subsidies, then your members of Congress are representing you. On the other hand, if you think that there should be less taxpayer money going to farmers, then you may not be too happy with how your congressional delegation is voting. Only Rep. Steve Womack voted in favor of an amendment to reform subsidy programs. Most of the time, Arkansas’s members of Congress were happy to support these federal props for the agricultural industry.