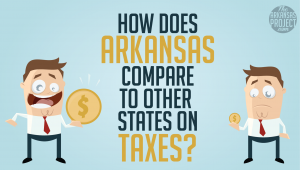 Every state does tax policy differently. This is good for policymakers at the state level, because they can look around the country for ideas. They can see what is working in other states as well as what is not working. Then they can adjust their tax policy accordingly.

The Tax Foundation is an invaluable resource for assisting in this process. It is a national think tank focused, as its name says, on tax issues. It recently released its annual compilation of how states compare on tax issues. Anyone interested in how Arkansas fares in relation to other states’ tax policy should take a look.

For instance, did you know that “tax freedom day” (the day upon which Arkansans stop working for the government and begin working for themselves), is April 13? Only 11 states have an earlier tax freedom day than Arkansas, which is good news for taxpayers. Business taxpayers don’t fare so well, however. In terms of the overall state business tax climate, Arkansas ranks 39th.

Arkansas also ranks very poorly in terms of sales tax rates. The state’s rate is ninth-highest in the nation. Once the average local sales tax rates are included, Arkansas has the third-highest sales tax rate.

Drivers and smokers get a little bit of relief, however. The state’s 21.8 cents tax-per-gallon is lower than all but 10 states (Pennsylvanians pay the highest at 58.7 cents per-gallon). Arkansas’s $1.15 per-pack tax on cigarettes is also lower than the rate in most other states. Nationally, there is significant variation in this tax. Missouri only imposes a 17 cents-per-pack tax, while Connecticut imposes a tax of $4.35 per pack.

The Arkansas government may not charge you much to smoke, but you’ll pay for the privilege of having a drink with your cigarette. The state’s $7.73 tax-per-gallon puts it 17th-highest in this category. Of course, that rate is much better than what you’ll pay in Washington — $32.52 per gallon. Once again, Missouri residents fare the best – their government only charges them $2.00 per gallon when they buy spirits.

Cell phone users in Arkansas also end up paying a higher-than-average tax rate. The average state and local tax on cell phone service is 12.25%, higher than only 7 other states.

These are just a few of facts that caught my attention while looking over this report. You should check it out and discover just how many ways Arkansas taxes you and how those taxes compare to other states’ taxes. It’s a good way to show what Arkansas is doing well on the tax front and what it could do better.