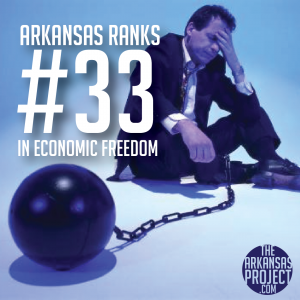 Arkansas has a lot of room for improvement in the realm of economic freedom, according to a recent study by the Fraser Institute.
According to Fraser, Arkansas is tied for 33rd place in the nation as regards economic freedom.
From the report:

“The freest economies operate with minimal government interference, relying on personal choice and markets to decide what’s produced, how it’s produced and how much is produced. As government imposes restrictions on these choices, there’s less economic freedom,’’ Stansel said.
In the most-free states, the average per-capita GDP in 2012 was roughly $55,000 compared to roughly $48,000 for the least-free states.
‘‘The link between economic freedom and prosperity is clear—–states that support low taxation, limited government and flexible labor markets see greater economic growth while states with lower levels of economic freedom see lower living standards and less economic opportunity,’’ said Fred McMahon, study co-author and Dr. Michael A. Walker Research Chair in Economic Freedom at the Fraser Institute.

We hope that, in the coming months, the legislature will take steps to improve Arkansas’ economic freedoms by rolling back unnecessary occupational licensing and other burdensome regulations.
You can read the rest of Fraser’s report here.